A later alternative method was to have an inverted U shaped frame with a hook in the middle that the unmounted wick could be suspended from. This method was used until the mid 1950s on Famos burners (and briefly by Coleman) that were derived from an Ehrich & Graetz design.

IMPORTANT NOTE:Mantles made for model 12, A, B, C and 14 lamps will not lock onto the newer galleries. Improved mantles for the model C can be held in place by a friction fit between the bottom skirts and the cone but care must be taken to keep the fit tight. Mantles made for model 21, 21C, 23 and 23A burners will lock on to the earlier gallery. If you decide to stock up on lox-On mantles, the best to secure for all around use are English made mantles marked for use with models 12, B and 21 that have the bottom lip on the frame and the new locking system. 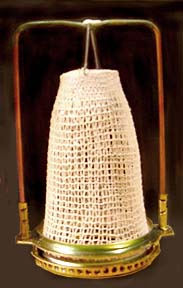 The Cone mantle used with the Aladdin model 1 & 2 was a vast improvement over the earlier adjustable hang man shape hanger and eliminated the handling of an unmounted mantle that the previous methods required. The Cap mantle came pre-mounted on an inverted U shaped frame that was attached to a base. The base slid down over the cone which was part of the gallery. This made centering of the cone easier to do and minimized direct handling of the mantle net.

This web site is not affiliated with Aladdin Mantle Lamp Company. Aladdin, and Lox-on are registered trademarks of Aladdin Industries LLC

The Lox-on mantle was introduced with the model 12 in 1928. The cone at the base of the mantle was transferred from the mantle frame back to the gallery. The new mantle locked into position over the cone maintaining the correct spatial relationship between the flame and the mantle. The flanges of the wire support locked onto slots at the top outer rim of the gallery. This mantle was cheaper to produce than the KoneKap mantle with no reduction in reliability.

The Aladdin cap mantle was anchored inside its box with a cardboard piece that held it by the top frame. The cotton wad was placed on top to keep the mantle and cardboard from moving inside the box.

Never touch a mantle anyplace except the frame. Even if the protective coating has not been burned off. Doing so will leave an oil spot that will cause additional heat and early mantle failure. Once the protective covering is burned off, the mantle is very fragile and can be destroyed by tilting or jarring the lamp. Handle a lamp with a mantle gently and dont tilt it. I have heard that if a used mantle is to be shipped that it could be coated with hair spray to make it more rigid. Once the move is over the hair spray can be removed with a match in the same way the coating is removed from a new mantle. I have not yet had an opportunity to try this to see if or how well it actually works.

Over the years the design of the lox-on mantle frame has undergone changes to reduce manufacturing costs. The first real change was for the Model C lamp. This was labeled the improved mantle. Two skirts were added to the bottom of the gallery frame that slide over the sides of the cone. At the same time the turned up outer lip on the mantle frame was eliminated reducing the mantles manufacturing cost. The outer lip provided a 360 degree barrier to the bottom of the mantle bag, keeping it in place and protected. The new mantles are more fragile than the mantles made for model 12, B and 14 lamps.

Incandescent mantles had been used on round wick kerosene lamps for several years before the Mantle Lamp Company of America as founded. By then the general shape, size and mesh size needed to glow properly under a kerosene round wick was well understood and several companies had been manufacturing both centre draft and side draft kerosene incandescent mantle lamps. The remaining problem area seemed to be how to best suspend the mantle over the flame in the exact correct location to get a full even glow and how to make the process easily enough do that anyone could do it first time.

TheSan Diego Mantle Lamp Companyused a forked ceramic rod sitting vertically at the center top of the lamp that supported an unmounted mantle from the inside center.

The KoneKap mantle Aladdin patented for the model 3 brought yet another level of precision placement of the mantle in relation to the wick. Basically the cone was removed from the gallery and became part of the mantle assembly. The base of the mantle assembly was located on the gallery with better precision. This guaranteed the proper location of the mantle in relation to the cone which funneled the heat to the mantle. The KoneKap mantle made it much easier for people to add a new mantle and have everything work properly with no fiddling. It provided Aladdin with a real technology lead over companies using earlier mantle mounting methods.

The Loxon locking system was changed for the introduction of model 21 gallery (which is itself a cost reduced gallery). The new mounting system is made up of four tiny tabs on the inside lower ring of the mantle frame where it fits against the cone and corresponding slots in the gallery cone. The new mantles will still lock into old galleries using the wire support flanges. 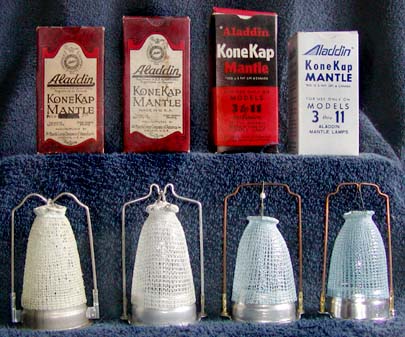 If you would like to discuss any of the contents please feel free to.

Later the bottom skirts of the improved mantle was changed with the addition of triangular slits up the side of each skirt. This seems to have been done for the model 23 gallery. I do not have the exact changeover point identified yet.

It was estimated that American consumers alone used 4,000,000 mantles per year when gas lighting was commonly used. Unfortunately this invention came just as the electric light lighting was starting to take hold in the big cities. Edison developed the first light bulb that lasted longer than one day in 1879, six years before the incandescent mantle was first patented. While the incandescent mantle lamp is the apex of kerosene lamp technology, it was doomed by the electric light where ever electric wires were stretched. 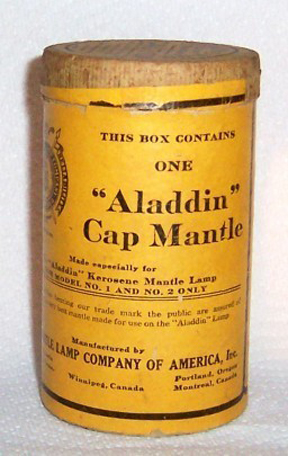 The incandescent mantle was invented by Carl Aur Von Welsbach of Austria and patented in 1885. Certain rare earth element oxides incandescence brightly under high heat. Baron Von Welsbach was the first to come up with a practical use for this phenomenon.

Originally, lamps used a single inverted L shaped arm to support a frame less mantle. The lamp owner adjusted the height of the mantle over the flame for the best most uniform glow. This method was pretty hit an miss. There was a short metal truncated cone that was part of the gallery that the bottom of the mantle had to sit over with the sides suspended down a little ways over the cone to just the right place. If the location was off, one side or end of the mantle might glow fully and the other not.

The design placed the bottom of the mantle frame up against the cone. Air gaps at this junction can cause flame spikes and erratic burning. An early Lox-0n gallery with a damaged rim may never burn correctly. An air gap between the mantle and gallery us the most common cause of problem burners.

Care should be taken when disposing of a broken mantle. The mantle, being composed of rare earth elements, is very slightly radioactive so you do not want fine particles from a broken mantle to become part of the household dust. Remove the chimney then vacuum the mantle material to get it off the lamp and trapped inside the vacuum. Do not breath the mantle dust and remember to wash your hands after disposing of the mantle frame. This is just a good practice suggestion as mantle particle radiation levels are very low. Radiation levels from trapped Radon gas is often higher in homes than that from loose mantle dust.

His patent covered a cylindrical framework of gauze impregnated with oxides of thorium and cerium. Placed over gas lamp burners jetted for heat and not light, it produces a much brighter light than an bare gas burner flame. When the gas is ignited, the mantle fabric burns away, leaving a brittle residual lattice of metal oxides. Light is produced when this lattice is heated to glowing by the gas combustion, although the mantle itself does not burn.

High humidity storage has been implicated in early failure of mantles. If this is indeed a primary cause of early mantle failure and you wish to store mantles for future use, placing them (still in their boxes) in a sealed plastic bag along with a packet of desiccant seems like a good idea.