It has been proposed that in the Old Kingdom the mention of loaves of bread refers not necessarily to loaves themselves but rather to their value, a kind of currency of account.[13]

Thus ancient custom and not momentary advantage and greed dictated prices and wages much of the time. If there was a shortage of some commodity, prices did not rise until only the wealthiest were able to pay them. Instead of becoming unaffordable to the poor because of the expense, it became unavailable to the lowly because of the precedence higher ranked individuals enjoyed. The outcome was the same: the poor had to do without.

During the early stages of human civilization, it was a rare economy that managed to rise beyond this bare-bones level of performance.Corn is, according to theConcise Oxford Dictionary, the chief cereal crop of a district, in the case of ancient Egypt corn refers to wheat and/or barleynot maize.

The vast majority of Egyptians existed at subsistence level. The basic needs of a person living in a warm country like Egypt are minimal: water, food, a simple shelter and some clothing. And the workmen were paid little more than such a minimum: during the Old Kingdom the daily ration or wage was ten loaves of bread[12]and two jugs of beer.

Walter Scheidel inReal Wages in Early Economies: Evidence for Living Standards from 2000BCE to 1300CE, Princeton/Stanford Working Papers in Classics, Dissertation 2008, p.22:Since wages for adult male workers were often so modest, labor force participation of both adult women and minors must have been high in order to fend off starvation.

One should not imagine a system where prices were fixed by a central authority, with directives sent to merchants and state inspectors descending upon weekly markets to check on prices. These were probably agreed upon by vendor and buyer after bargaining, with traditional prices as guidelines.

But during the New Kingdom metal rarely changed hands, though it was often used as a base for evaluation and comparison.What he was paid for the painting of a coffin: Weaving of a garment, worth 3seniu, 1 sack worth sack of corn,[22]1 mat with coverlet worth seniu, 1 bronze vessel worth seniu.Receipt from Deir el Medine

During the latter part of the 20th dynasty, grain prices rose to between 8 and 12 deben, falling to 2 after the end of the New Kingdom. Only corn prices fluctuated thus strongly.

According toR. J. Leprohon, 2001. This ratio was much lower than in other ancient cultures. It may have reflected the relative scarcity of silver in Egypt, which did not have any silver mines of its own – always remembering that the principle of supply and demand seems to have had little influence on the egyptian economy.

For best results save the whole webpage (pictures included) onto your hard disk, open the page in Word 97 or higher, edit if necessary and print.

M. Lichtheim,Demotic Ostraca from Medinet Habu, University of Chicago Press 1957, p.58. If the cow died a compensation of three stater was due.

suggested the following annual requirements for a working class family in Roman Egypt, the Respectability basket containing the quantities needed not to go hungry and escape deprivation, i.e. live a life of respectability, while the Subsistence level basket did little more than prevent starvation:

As is the case in any deeply conservative society, one was expected to do the right thing, right meaning whatever had been done for generations and belonged therefore to the correct order of things, sanctified asmaat. Of course, people profited to varying degrees, but these differences were generally accepted by the populace: Everybody enjoyed a part of the countrys wealth which could be quite small, as long as the distribution was seen to be fair.

The Egyptians generally used a decimal system. Theseniumay be the result of Mesopotamian influence. It disappeared during the latter stages of the New Kingdom.

command economy:using modern nomenclature for ancient phenomena and institutions is always misleading. The ancient Egyptians did not plan their economic activities in the way the unlamented Soviet Union did, not having the necessary statistical information. (Some people will say, neither did the Soviet Union.) Production, trade and consumption followed traditional patterns which had proved themselves in the past. Planned action was probably mostly restricted to the levying of taxes, generally in the form of grain, its storage and redistribution, on a local or regional level.

According to estimates the yearly consumption of wheat per family was about 22 artabas, 890 litres (Andrew Monson, 2005).

New KingdomAseniu, apparently one twelfth of adeben[11], was about 7.6 grammes of silver, equal to almost 8 deben of copper at New Kingdom rates.

Cereal based foods were the base of alimentation, and wages were paid to a large part in grain, but other goods are also mentioned, such asfruit and vegetablesfishclothesand the like. A great deal of these rations was consumed by the workers and their families[19], and little surplus remained with which to acquire other necessities, let alone luxuries.

Housing would have made up five to ten percent of the total household expenditure. In pre-Roman times such a list would not have included cheeseconsumption ofmilkand milk products was very lowsoap, which had not been invented yet, andwinethe popular drink in pre-Roman times wasbeer. Eggs, too, appear to have played but a very small part in their diet and meat consumption may well have been lower. Fish should probably be substituted for the food items not available in pharaonic times.

[10] Some Reflections on the Price Formation and Price Fluctuation in the case of Egypt at the End of the Second Millennium B.C. [13] Les pratiques montaires en gypte Ancienne 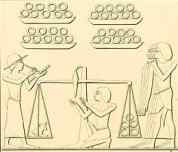 Better information can be had about the New Kingdom. Asack of corn[22]containing 77 litres of wheat weighed about 58 kg and was valued at twodebenof copper. At Deir el Medine, where workers were presumably rather better remunerated than elsewhere, the corn[22]rations they received on day 17 of the second month of winter, Year 29, were as follows[14]:sacks of corn[22]

According to the Zenon papyri, during early Ptolemaic Period the wages of an unskilled worker were about one obol (one twelfth of a kit) a day[17], but a man named Kleon paid his workers two and a quarter obols per day day some time between 256 and 248 BCE.[23]PricesIn Egypts command economy[2], based on the collection and redistribution of much of the agricultural produce not directly consumed by the producers themselves, prices remained stable for great lengths of time and market forces had only a marginal influence on them during times of strong government and little social mobility.

These silver tetradrachmas were lighter than their nominal value would suggest, worth abroad only 20 instead of 24 obols. This may have been a governmental attempt at keeping the silver in Egypt[17].

Too few data are available about the situation of the peasants, but it is doubtful whether they were better off than the wage earners, concerning whom records are slightly more abundant, and these reflect living conditions far removed from those in an ancient Cockaigne.Until the middle of the first millennium BCE no coined money at all was used in Egypt, or anywhere else for that matter. Exchanges were concluded using the values of services or commodities. These were often grain, but later increasingly metal rings of fixed weight, a sort of proto currency:Behold, I have sent you 24 copperdebenthrough Sihathor for the lease of the land.Letter of Seqanakht, 11th dynasty

The list below reflects New Kingdom prices of a number of commodities in copper unless otherwise stated. Copper was worth approximately one hundredth of its weight in silver during the New Kingdom. Ten copperdebenwould have equalled onekitof silver. There were wide fluctuations due to varying sizes, quality etc, and prices were affected by the passage of time.

Given these wages and prices one ceases wondering why ordinary Egyptians sat on the floor, slept on mats, walked barefoot, took off their scanty clothing in situations where it might get ruined, and sometimes pulled the ploughs themselves because they could not afford a cow.

thedebenwas about 91 grammes of copper 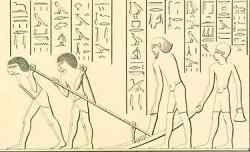 A large part of ancient Egyptians were peasants, living on whatever was left of their produce after rent and taxes had been extracted. Most of the rest were workers who were paid wages which barely sufficed to keep them and their families alive. Scheidel