Prior to the recent studies, writing ink was assumed to be primarily carbon based until the fourth and fifth centuries A.D. However, experts at the University of Copenhagenexamining ancient textswith X-rays have found that two millennia ago the pharaonic civilization in Egypt used inks containing copper.

In Pictures: The 75 Most Powerful Military Forces in the World

Experts studying fragments of Ancient Egyptian papyrus have discovered in the time of the Pharaohs scribes used advanced inks hundreds of years before they were used anywhere else.

50 Facts About the Human Body You Probably Didnt Know

The team was reviewing fragments from the Papyrus Carlsberg Collection at the University of Copenhagen from the private papers of an Egyptian soldier, Horus, stationed at a camp in Pathyrisand other manuscriptsfrom the Tebtunis temple library.

Archaeologists and Egyptologists have long marveled at thesophistication of ancient Egyptian civilization. Piecing together how the ancient people were able to devise and build the Great Pyramid at Giza in just 20 years has thrilled generations of explorers and experts.

None of the four inks studied here was completely identical, and there can even be variations within a single papyrus fragment, Christiansen said. This makes it impossible to produce maps of ink signatures that otherwise could have been used to date and place papyri fragments of uncertain provenance, he said. 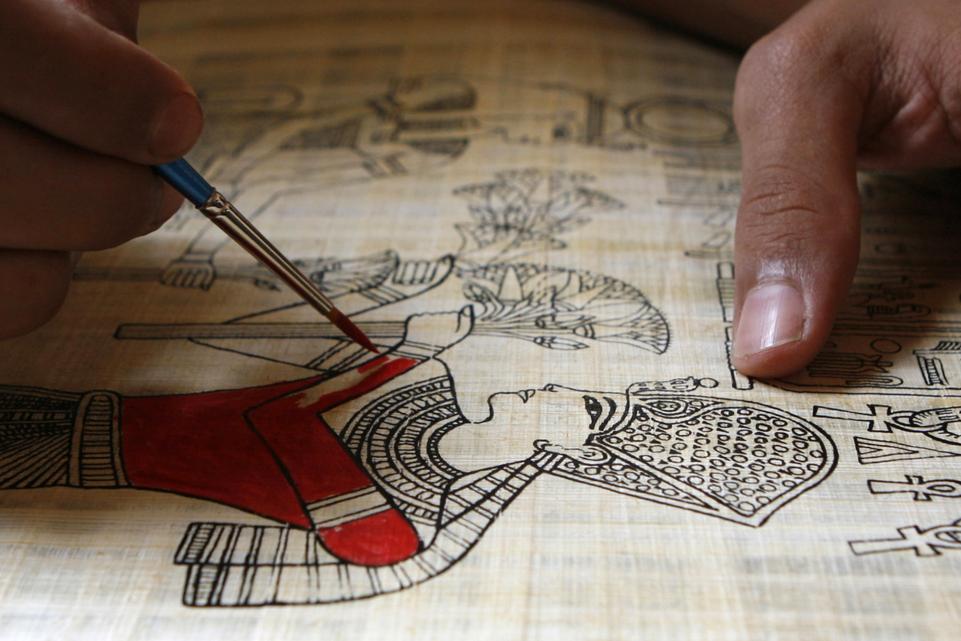 Christiansen explained the discovery of the new ink could not be used to more precisely date the documents because of the great deal of variation among them.

The multi-disciplinary team from the Danish university analyzed the pieces of papyrus, written over a period of 300 years from different geographical regions, using advanced synchrotron radiation based X-ray microscopy equipment. The study was carried out in Grenoble, Switzerland as part of the European CoNext project.

However, the discovery of the advanced, metal-based ink could be used to piece back together papyrus that would otherwise be left destroyed.  It might facilitate the identification of fragments belonging to specific manuscripts or sections, Christiansen said.

The 50 Highest-Paid Sports Stars in the World

An Egyptian worker paints on a sheet of papyrus at a workshop in El Karamous village in El-Sharkia, about 100 km (62 miles) northeast of Cairo, June 20, 2009; a study has found Egyptians used metal-based inks

Beyond this application it is hoped that the discovery will also help experts in the area of conservation.

The composition of the copper-containing carbon inks showed no significant differences that could be related to time periods or geographical locations, which suggests that the ancient Egyptians used the same technology for ink production throughout Egypt from roughly 200 B.C. to 100 A.D., Egyptologist and author of the study Thomas Christiansen from the University of Copenhagen said in the journalScientific Reports.

In Pictures: The 30 Highest-Paid Actors in the World