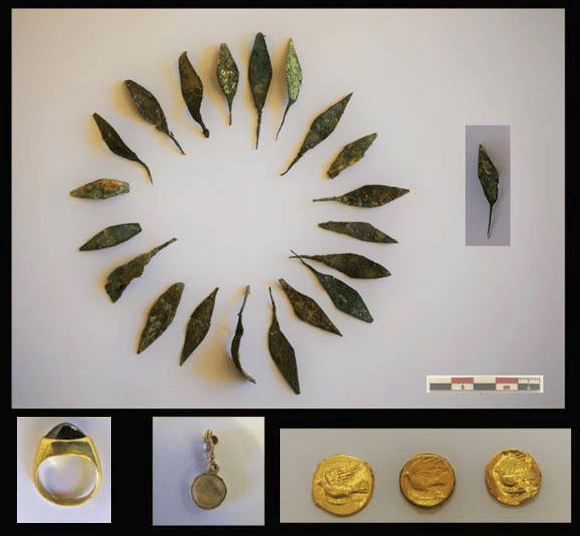 Of particular interest to the excavation team, led by Elena Korka, were the older Greek parts of the structures. One side of the Roman burial monument was built above an typical rectangular Hellenistic basement made of limestone and then coated in a thick layer of mortar.

Archaeologists in Greece have uncovered rare jewels, coins and other artefacts while excavating tombs near the ruins of the classical city of Corinth dating to between the fourth and first centuries A.D.

In other areas they found evidence of graves from the earlier Greek period, pottery including a figurine in the shape of a dove and other ritual items such as perfume. It also appeared some of the lower vaults in the buildings would have been associated with other Greco-Roman rituals.

Also within the dig site the archaeologists recovered items from a series of different burial plots. Fourteen graves, organized in circles, as was Roman convention, yielded a number of gold and andsilver coins, vases and a series of lamps,the most striking of which bore depictions of the Roman goddess Venus and two cupids.

The period of Roman rule in Greece began following the destruction of Corinth, when the Roman Empire annexed the Greek heartlands and crushed the Peloponnesians, the Greek peoples living in the southern part of the country.

Among the other ritualistic items buried with the dead were perfumes, artefacts made of gold, gold foil and elaborately crafted glassware, as well as items of pottery.

Their bodies were found alongside elaborate gilded bronze leaves, a golden ring, precious stones and gold and bronze coins from the surrounding region.

The team of experts, working with the Greek Ministry of Culture, made the discoveries in eastern Corinthia, at the site of the ancient village of Tenea, while excavating a burial ground with two distinctive chambers built whenGreece was part of the Roman Empire.

The Greek Ministry of Culturesaid in a statementthat the Roman burial monuments appeared to have been built into a preexisting Hellenic substructures from the period between the death of Alexander the Great in 323 B.C. up until the Roman conquest in B.C. 146.

Five of the most well-appointed tombs, the experts said, would have belonged to wealthy inhabitants of Roman Greece. Bodies were found alongside elaborate gilded bronze leaves, a golden ring, precious stones and gold and bronze coins from the surrounding region.

The Greeks were able to maintain relative autonomy from their Roman rulers during the early period of empire withsophisticated Greek culture, its philosophy and literature having a profound influence on Romes educated elite.