Divine and royal headdresses and crowns

One of the most astonishing facts about Egypt is how little everyday life changed over the millennia. The rhythm of Egyptian life was the rhythm of the Nile until a few years ago, when the Aswan dam was erected. Even today one can find the ancient shadoof, oxen pulling ploughs and houses made of mud bricks.

Childhood: Origin – Birth – The Toddler – Education – Coming of Age – Death of a Child

Ive tried to be as accurate as possible. Should you find facts which are incorrect, pleaselet me know. Thank you.

Contemporary plan of the tomb of Ramses IV

Dyeing fabrics and other materials.

The Country and its people: geography, population, flora, and fauna

Slavery: The Enslavement – The Slave Population – The Price of a Slave – The Treatment of Slaves – Runaways – The Setting-free – The Status of Women and Foreigners

Theadministration: The court, the civil adminstration, the military, foreign relations, the temples, regional governments, the vice-royalty of Nubia.

Humour: What the ancient Egyptians laughed at

The funerary cortge and the opening of the mouth ceremony, Ptolemaic period

Transliteration and pronunciation of ancient Egyptian

The gods are gone, so are the pharaohs, the language and the writing. The cities look European in a ramshackle sort of way, transportation is partly 20th century, theres some industry, and radio and television are everywhere. But villages in the farther off corners of the country must still look very much like those of thousands of years ago.

Contracts and other legal documents

The Social Classes in Ancient Egypt: The nobility, the intelligentsia, labour, the outcast, the military, the priesthood, social stability

The decorative palettes of the late 4th millennium

Building in stone:The tools, the stone, the masons craft 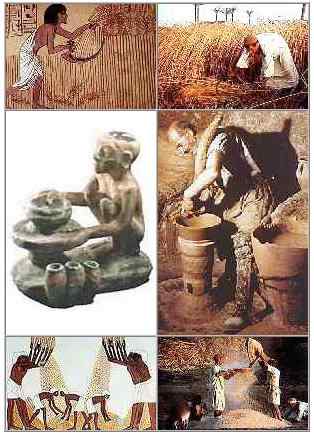 Cities and citizens:The cities and their gods – National and regional centres – The citizens – Citizens of the army

Mummification: the embalmers and their art

Journeys of exploration: Henenus exploration of the Red Sea, journeys to Punt under Hatshepsut, the circumnavigation of Africa

The Chariot: History, design and use

The four kas: Human happiness as gift of the gods

Composition and development of tools

The Religion of the People: Worship in the Temples – Personal Piety

The economy: Population, sources of wealth, duties imposed and beneficiaries of the system.

I mostly chose topics not widely dealt with on the web. For the time being I do not include anything about pyramids or royal tombs for instance, as plenty of material can be found on these subjects.

Some of the articles on the Touregypt site are blatant and systematic plagiarisms and no references are given, with the full knowledge of the sites editor

Thegeographyof Egypt through the eyes of Herodotus

Master Index of Articles and Essays on Egypt (Touregypt site)

Body and soul: Explanations of the terms associated with the Egyptian view of self

Law enforcement: The police, the criminals and their crimes, the laws, the courts, the punishments

Making beer, much less widespread in Egypt today than it was in ancient times

The priests of Amen and the Theban Kings

Flax- The crop and the production of linen.

The Egyptians and their Dead: Life after Death – Ancestor Worship – The Dead and the Living – Remembering the Dead

Mummification: the embalmers and their art

Marriage as a tool of foreign politics during the New Kingdom

Desertion and revolt of a discontented army

These are just suggestions for further reading. I do not assume any responsibility for the availability or content of these websites.

Agriculture and horticulture- The role of the Nile, irrigation, the crops.

Stone vessels: The stone, the craftsmen, the tools, the vessels

Genderin the economy, literature and art

Descriptions generally refer to the period of the New Kingdom.

Pliny on Nitre, its production and uses

The declarations of innocence: the Negative Confessions

Heka, the Magic of Ancient Egypt: Acquiring Magical Powers – The Practitioners of Magic – Practical Purposes – The Practice of Magic