away in 1911 and Nathaniel Bradley in 1915. The company continued on through the 1930s and was purchased by theCharles Parker Company, also of Meriden, Connecticut, in 1940. The Parker Company was quite diversified in its product line, also producing an extensive line of lamps and high-end chandeliers. Parker operated its acquisition as the Bradley & Hubbard Division. Parker ceased production of the Rayo lamp in the early 1950s. In 1973, the Bradley and Hubbard buildings were demolished, effectively ending that chapter in American lighting manufacture.

, 1998, The International Guild of Lamp Researchers

Between April 7, 1868 and December 23, 1913, the company was listed as the assignee for at least 89 lighting patents – see thepatent listbelow. Many of these patents were for lamp and chandelier designs and various improvements in lamp burners. Four inventors contributed sixty-three percent of the listed lighting patents. They are:

There are two excellent Bradley & Hubbard catalogs that have been reproduced. The first is catalog No. 46, June, 1888 of Decorated and Bronzed Metal Table Lamps (© 1995 David Broughton by The Historical Lighting Society of Canada) and the second the 1883-84 Illustrated Catalog of Kerosene Fixtures (© 2001 David Broughton).

The Bradley and Hubbard Manufacturing Company 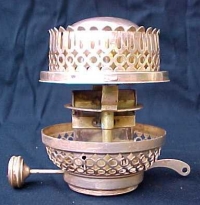 the company reorganized to form the Bradley and Hubbard Manufacturing Company. Walter Hubbard served as President and Nathaniel Bradley as Treasurer. The firm enjoyed rapid growth throughout the 1880s. By 1888, the company employed over one thousand workers and had showrooms in major cities including New York, Philadelphia, Boston and Chicago. One of the most prolific of the B&H products was the Rayo lamp it produced under contract for Standard Oil. In keeping with the changing times, Bradley & Hubbard produced a variety of electric lamps as well.

names in lamps is Bradley and Hubbard. The company loosely began in 1852 in Meriden, Connecticut when Nathaniel and William Bradley, Orson and Chitten Hatch, and Walter Hubbard, formed Bradley, Hatch & Company. This incarnation of the company only manufactured clocks. The Hatch brothers sold their interest in the company in 1854 and it was renamed Bradley & Hubbard. Clocks remained the firms primary product into the 1860s. In addition to their successful line of clocks, Bradley & Hubbard also produced a wide range of household items including match safes, call bells, andirons, urns, bookends, frames, desk accessories and vases.

Certainly one of the most recognized

D = Design Patent, RE = Reissue of an earlier Patent

[ additional patents will be added as they are discovered ] 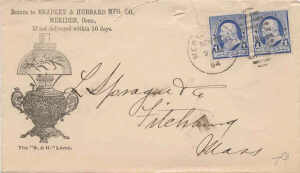 Technological advancesin drilling and refining crude oil in the late 1850s and early 1860s paved the way for the demise of whale oil as a lamp fuel. Soon afterColonel Edwin Drakestruck oil in Titusville, Pennsylvania on August 27, 1859, Nathaniel Bradley saw an opportunity to capitalize on the future of this new fuel. Nathaniels decision to produce an extensive line of kerosene burning lamps proved to be a wise business decision. Kerosene was soon to become a widely used, safe and relatively inexpensive lamp fuel.