…this falling behind in military technology was certainly a contributory factor in the coming decline.

While the Ptolemies support for traditional culture was maintained through a programme of temple-building, in which the Roman emperors were depicted as pharaohs, the infiltration of foreign philosophical and religious ideas continued apace. In particular, Christianity took early root in Egypt, doubtless aided by its many similarities to the popular cult of Osiris and Isis, which also featured an unjustly killed divine figure who was resurrected to provide humans with a guarantee of eternal life.

The civilisation of ancient Egypt can be traced back in recognisable form to around 3000 BC. It was to endure for over three millennia and it is perhaps the most instantly recognisable of all ancient cultures today. The question of how it came to an end is a perennially popular one, but actually quite difficult to answer, as it is by no means agreed as to what constitutes the end of Egypt as an ancient civilisation.

A History of Ancient Egyptby N Grimal, translated by I Shaw (Oxford, 1992)

Facade of temple of Luxor, erected by Ramesses II©But what led up to this event, and the series of other potential ends that we have already referred to? The seeds actually lay around one-and-a-half millennia earlier, when Egypt was apparently at the height of its powers in the reign of Ramesses II (1279-1212 BC), during what is known as the 19th Dynasty of Egyptian history. Ramesses great foes were the Hittites of what is now modern Turkey, a key battle with whom, at Qadesh, was frequently displayed on the great pharaohs temples.

However, the new ruler, Ptolemy I, was a Macedonian Greek, and the ruling class of the state was now foreign, running the country as part of the Ptolemaic kings wider Mediterranean agendas. The ancient religion and culture were supported and new temples built, but the dominant culture was now increasingly European, with Greek becoming the language of state.

Eric (voiced by Daniel Roche) visitsRoman Britain, where he lives a life of privilege.

Is it the definitive end of native Egyptian rule (at least until the 20th century)? In this case the answer would be the flight of King Nectanebo II in 342 BC. Is it Egypts absorption into the Roman Empire in 30 BC? Or the last appearance of the ancient hieroglyphic script just before AD 400? Or the closure of the last pagan temples in the sixth century?

By then, Egypt was a Christian country which now rejected much of its heritage as indefensibly pagan. All that survived was the Egyptian language itself, fundamentally the same as that spoken by the first pharaohs, three-and-a-half millennia earlier. And even that was not to endure, since with the Arab invasion in 640, Arabic began to displace it, until by the 16th century it was essentially restricted to Church liturgy. But it still clung to life, and its survival was to be a key tool in the decipherment of the ancient hieroglyphs in the 19th century.

By the fourth century AD, the old ways were largely concentrated in the south of Egypt and the remote Western Desert oasis of Siwa. Perhaps the most important sanctuaries were concentrated on the temple-island of Philae, on what was then the countrys southern border. It was there that last inscription in hieroglyphs was made in 394 AD, as well as the final example of its hand-written form, demotic, in 452 AD, and it was here that the last pagan sanctuaries in the Nile Valley were forcibly closed in 553 AD.

The island of Philae, showing temple of Isis©This prosperous state was to be short-lived, however, as late in the reign of King Taharqa (690-664 BC), he became embroiled in a disastrous war with the Assyrians, who invaded and sacked many cities, including Thebes. Upheaval back home led, however, to an early Assyrian withdrawal and the setting up of a native Egyptian regime (the 26th Dynasty) that was to last for some 140 years.

The Oxford History of Ancient Egyptedited by I Shaw (Oxford, 2000)

[The BBC is not responsible for the content of external websites.]

The last known hieroglyphic inscription, in the so-called Porch of Hadrian at Philae©The increasingly bloody internal struggles of the ruling house brought Egypt within the orbit of the still-growing Roman Empire, culminating in the defeat of the last of Ptolemys ruling descendants, Cleopatra VII, and her Roman lover Mark Antony in 30 BC, resulting in the countrys absorption into the empire that same year. Egypt now became a mere province, with its primary goal to provide grain for the rest of the empire.

Although of foreign – Libyan – origins, he brought the south back under central control by the expedient of supplanting the old High Priestly family with his own son, and pursued an aggressive foreign policy, including military campaigns in Palestine, during one of which Jerusalem was sacked.

The net result was that for the century from 1070 BC onwards, under the 21st Dynasty, Egypt was split in two, the north ruled by the pharaoh, based in the new city of Tanis in the north-east of the country, and the south by the High Priest of Amun at Thebes (modern Luxor). The High Priests nominally owed allegiance to the king, but in practice they comprised an independent line of hereditary rulers, whose status was not solely religious, as they also held the title of Army Leader, making their regime probably more of a military dictatorship than a Taliban-style theocracy.

BBC © 2014The BBC is not responsible for the content of external sites. Read more.

Although this was apparently a time of peace and well-being, the Assyrian invasion indicated that Egypts fate was now firmly tied in with the rest of the eastern Mediterranean world, in which it struggled to maintain its economic and military position. Indeed, the army now relied heavily on foreign – especially Greek – mercenaries, rather than the native Egyptians of the countrys glory days. 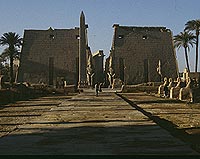 However, within a century, the country had split again, with Thebes now ruled not by High Priests, but by its very own line of pharaohs, the 23rd Dynasty, running in parallel with the Tanite (based in Tanis) northern king.

Egypt now became a mere province, with its primary goal to provide grain for the rest of the empire.

Dr Aidan Dodson is a Visiting Fellow in the Department of Archaeology at the University of Bristol, where he teaches Egyptology. A specialist in Egyptian funerary archaeology, he has lectured widely and written extensively. Some of his most recent works includeThe Hieroglyphs of Ancient Egypt(Barnes & Noble, 2001) andThe Pyramids of Ancient Egypt: A Handbook(New Holland), released in 2003.

The association of the ancient hieroglyphic writing system with the old religion, together with the wide currency of the Greek language in Roman Egypt, led to the Christians beginning to write the native Egyptian language in an augmented version of the Greek alphabet. The old art style was also tainted with paganism, and so was also replaced by a style derived from outside, thus further eating away at key parts of the ancient Egyptian civilisation.

Egypt thus fell easy prey to the expanding Persian empire in 525 BC, remaining under their dominion for over a century. National rule was revived between 404 and 342 BC, but the various regimes (the 28th, 29th and 30th dynasties) were riven by in-fighting, and the Persians reasserted their power in 342 BC. Egypt was seized by Alexander the Great in 332 BC, but regained independence at the break-up of his empire in 310 BC.

In many ways the last suggestion is perhaps the most appropriate, as in all the other cases, the core religious and artistic values of the country continued on, albeit increasingly debased and under pressure. However, the demise of the hieroglyphs was a manifestation of the decline and fall of the ancient religion in the face of Christianity, itself ultimately to be supplanted by Islam.

The world of ancient Egypt continues to fascinate even today, but we still dont know why it foundered. What was it that brought this glittering and mighty civilisation to an end?

Egypt of the Pharaohsby A Gardiner (Oxford, 1961) 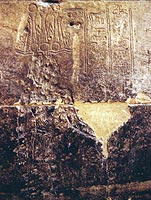 Travel back in time toAncient Britainand create your own stone circle.

Although now reflecting a dead culture, the image of ancient Egypt continued to endure, through the Bible and the works of ancient and medieval travellers, to be revived in the years that followed the invasion of Egypt by Napoleon Bonaparte in 1798, and the decipherment of the hieroglyphs in the 1820s. As a field for scholarly research, or simply a holiday destination, Egypt remains imprinted on the worlds consciousness in a way hardly equalled by any other ancient society, centuries after its culture apparently vanished from the earth.

One of the differences between their armies was that while the Egyptians were armed with weapons of bronze, the Hittites had access to a new material – iron. Although they had ample reserves of copper (the key component of bronze) within their boundaries, the Egyptians lacked sources of the far more effective metal. While this was by no means a decisive issue, this falling behind in military technology was certainly a contributory factor in the coming decline.

The Theban kings soon found themselves embroiled in a long-running civil war, while in the north a number of semi-independent principalities grew up, all together sapping the strength of the country as a whole. This decline coincided with the rise of a power to the south of Egypt in Nubia – spanning the borders of the modern states of Egypt and Sudan. Long a colony of Egypt, Nubia now had rulers (the 25th Dynasty) who regarded themselves as ideologically the heirs of the ancient culture of Egypt, and as such they became overlords first of Thebes, and then took over the whole of Egypt, becoming pharaohs of a united kingdom of Egypt and Nubia around 720 BC. 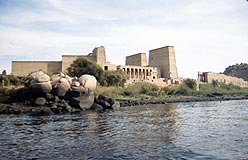 All that survived was the Egyptian language itself, fundamentally the same as that spoken by the first pharaohs…

Ptolemy VIII, Euergetes II, and his wives Cleopatra II and III, as shown in the temple at Kom Ombo©A short-lived national revival began with the accession of Shoshenq I around 945 BC as founder of the 22nd Dynasty.