Prior to the 18thdynasty sun-worship was unknown to the Egyptians. About 1530 B.C., Amosis became leader of the 18thdynasty who became the king of upper and lower Egypt (Menes around 3100 B.C. is believed to have unified the two halves of Egypt[40]). Towards the end of the 18thdynasty kingship over the country was given to a foreign country(s) most likely through marriage. It was at this time that very heretical changes were made to the religion of Egypt and sun worship was introduced.[15]

Castor-oil, a flammable extract (such as for lamp oil), is abundant in the form of the sillicyprium tree (Ricinus communis) that is found throughout Egypt.[3]Typically to get the caster oil (which is also a well-known ointment) can be done by pressing the berries (similar to grapes to obtain one of the ingredients of wine) or boiling the berries and skimming the surface of the water of the oil film[3].

The Egyptians had a custom which respected theft as a profession. The ancient office Shekh of the thieves (where people register their profession as thievery) is located in Cairo and was still in use in 1881.[31]

The hieroglyphs could be read either starting at the left or the right. In order to determine the direction to begin reading is to look for a human or animal symbol. The symbol will always face in the direction that the reading should start at. Reading is always done from top to bottom (such as with columns).[39]

In Ancient Egypt, as far back as the reign of Binothris (third monarch of the second dynasty), allowed supreme direction of affairs without reserve to women, as in those states of modern Europe before Salic law had been introduced.[30]

An interesting separation between the Ancient Egyptians was that no one presumed to interfere with the occupation of a different trade (or work) that differed from his or her own. As written by Diodorus no tradesman was permitted to meddle in political affairs, or to hold any civil office in the state, lest his thoughts should be distracted by the inconsistency of his pursuits, or by the jealousy and displeasure of the master in whose business he was employed. The Ancient Egyptians feared that if no such law existed, in consequence of necessity or desire, the individual(s) would become conspicuous in public station and those (by vanity and self-sufficiency) would interfere in matters out of their sphere.[17]

Ancient Egyptians trained a variety of animals and aquatic lifeforms (such as fish). Of note is their training of monkeys which assisted with the gathering of fruit from sycamore trees.[8]

After Egypt was absorbed into the Roman Empire since 30 B.C., a large volume of immigrants of Greeks and Romans came into the country. Since they were largely unable to grasp the intricacies of Egyptian scripts, they adopted a written version of the Egyptian language now referred to as Coptic (transcribed into the Greek alphabet with seven extra letters to express sounds not found in Greek).[37]

Victoria Museum of Egyptian Antiquities at Uppsala University in Sweden

Apparently it has been concluded that Ancient Egyptians had the game of chess; their game was actually draughts that does use a checkerboard and pieces are aligned similar to that of modern-day chess but was not chess.[10]

From the earliest period the priests of Ancient Egypt believed in one Deity or Creator (as had been the case in Ancient Mesopotamia). It was later that idols and emblems surfaced which were not primitively supposed to be real gods…rather as attributes of the Creator (an example being the sphinx having the body of a lion and head of a man representing the physical and intellectual power they imagined their monarchs were endowed with).[23] 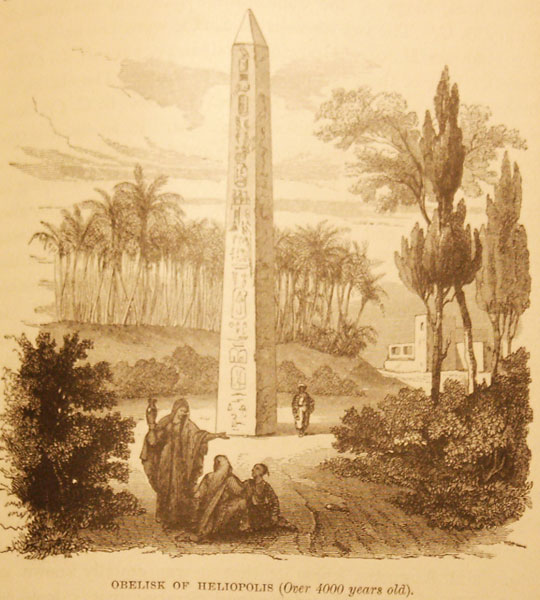 Despite the commonality of the camel in Ancient Egypt, written record known as far back as the time of Abraham, the camel was never placed into paintings or hieroglyphics.[13] 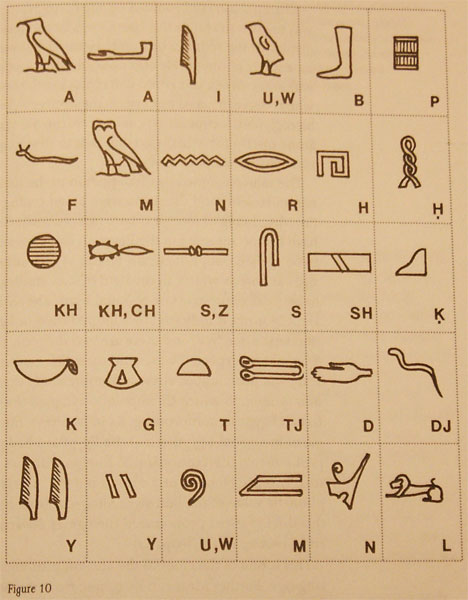 The Egyptians made considerable wealth from a variety of sources and the gold mines of the Bisharee desert were very productive; it is believed that those mines were worked at the earliest periods of the Ancient Egyptian monarchy. The gold mines of Allaga, quartz, copper, lead, iron emerald and sulfur mines near the Red Sea were also used.[32]Ptolemy Philadelphus (according to Appian) held an immense treasure of 740,000 talents ($890,000,000US in 1881 dollars or at least a quarter of that sum)[33].

There is an interesting legend regarding one of Egypts ancient gods, Thoth, wherein Thoth composed a book full of wisdom and science and placed it within a series of metallic boxes. Afterwards it was thrown into the Nile at Coptos where sometime afterwards it was searched for and found. While it gave the possessor vast knowledge and power it also gave equal misfortune.[6]The full-text of the legend, which seems to be beyond public grasp, was mentioned in Tale of Setnau[7].

The workmen who built the Pyramids commonly ate figl (raphanus), onions, garlic and lentils.[26]Pictured below is an ancient relief of how the Ancient Egyptians recorded moving a massive statue (click on the image for larger view).

Manetho wrote that at the end of the 16thdynasty, Egypt was invaded by Shepherd or Pastor Kings for a period of 500 years (the invasion was supposed to be nearly cotemporaneous with Abrahams visit to Egypt). They were expelled by Alisphragmathosis and he recorded that they went through the desert into Syria and that they built a city in that country called Judea, of sufficient size for 240,000 of them and called that Jerusalem. Josephus believed them to be Jewish, but Wilkinson has rejected that notion.[24]

Another popular game in Ancient Egypt was bull fighting…actually having two bulls under control of two men, fight each other.[12]Ancient Egyptians also enjoyed dancing and had recorded one type of dance as shown below.

Stay notified when site changes by adding your email address:

The yearly inundation (or flooding) of the Nile typically starts in June or July and continues until November or December; for an average water level difference of 22 – 26 feet.[2]

The use of dice, acknowledged by Plutarch, was a early invention of the Egyptians noted in a mythological fable involving the diety Mercury.[11]

Papyrus scrolls were heavily used in Ancient d Papyrus because the scrolls were made from the Papyri plant (which is largely extinct from Egypt today). A papyrus scroll is made by: removing the rind exposing the interior of the stalk; the interior is cut into length-wise thin slices and laid next to each other on a flat board; a second series of slices was placed over the first series at right angles with a glue placed between them; then the two layers were pressed together and dried.[18]

Greeks derived their tables of the fixed stars from the Egyptians and Chaldeans; the subject of which was one of the astronomical books assigned to Thoth or Hermse and was required reading by a horoscopus which was a high ranking priest in Egypt.[5]

The myth of creation and the great deluge (as referred to by many other ancient civilizations such as theSumerians) as recorded by the Ancient Egyptians are at odds with the Septuagint Text that Archbishop Usher had referenced.[20]Ptolemy Philadelphus whos reign was 246 B.C. demanded from the High Priest of Israel, a copy of the Hebrew scriptures in exchange for freeing 100,000 Jews from bondage; a verified copy was given to him and 70 men at the Isle of Pharos in Alexandria translated it into Greek — thus the word Septuagint which means translated by seventy (the Septuagint Text was referred to as Masorite by the Jews). However, about 100 A.D. the Jews found the early prophecies of Jesus to be at odds with thier disbelief in his divinity and had corrupted the text of the Masorite. The annals of the Egyptians, however, had reinforced the records by Josephus and Hales as the more accurate chronology of early post-deluvian times versus the modified Septnagint Text.[21]

< – A compendium of world-wide writing systems from prehistory to today

Tours for the Enthusiast and the Virtual Egyptian Museum

Beef and goose was the principal part of animal food throughout Ancient Egypt (but could not be eaten during winter); the cow was considered as sacred and could not be eaten regardless of season.[9]Ox, kid, wild goat, gazelle, geese, ducks, teal, quails were commonly selected when serving guests; mutton (pigs) were excluded as well as sheep.[25]

The liquid extracted from Date trees, could be drunk in large quantity, but after fermentation it had a fast and powerful effect (intoxication). Lowbgeh (palm-wine) is gathered by making an incision at the heart of the date tree below the base of the upper branches. However, this method forces the date tree to stop producing fruit and will typically die afterwards.[29]

Discoveries made by Champollion have traced the sculptured letters and alphabetical signs [of the Ancient Egyptians] to periods prior to the existence of Abraham and Moses. Prior to his discoveries, from Heroditus, Plato, Tactitus, Plutarch and others, it was suspected that Egypt had invented the method of alphabetical writing.[22] 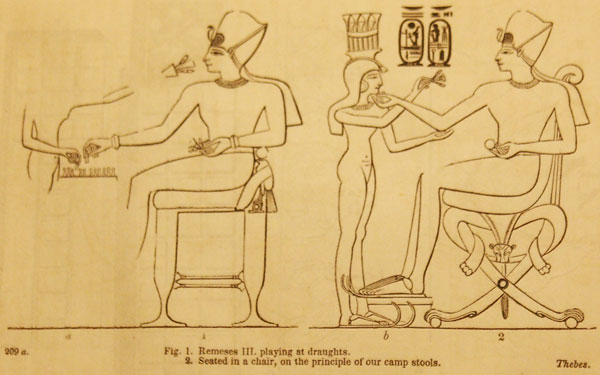 Father Athanasius Kircher was the first European scholar to identify Coptic as the last popular language of the Egyptians in 1643 A.D. Jean-Francois Champollion, was one of his students, eventually deciphered the Egyptian hieroglyphic.[38]

The art of glass working was common in Ancient Egypt over 2000 B.C. and are known to have been acquainted with it as far back as the reign of the first Osirtasen.[34]

Examination of ancient remains has revealed that the origin of the Egyptians was from a Caucasian race of an Asiatic immigration(s) which extended further south throughout Ethiopia, Abyssinia, and the southern coast including the Kafirs.[14]

(Translations occur based on how you type. For best results, use simple words as language has developed a lot since the time of this ancient language. If some images show broken icons, you can highlight the translation word(s) and copy that into the search box. On lengthy search results browsers may indicate broken image icons when, in fact, they are not.)

Obelisks (monoliths), which are of Egyptian origin, were built to commemorate the style and title of the king who erected them; the king dedicating them to the deity whom was to be honored.[45]

The Ancient Egypt Site – The History, Language and Culture of Pharaonic Egypt

Within the Book of the Dead, among the 42 laws of the Egyptian religion under the 125thchapter is very similar to the teachings of Christianity. It has been conjectured that Moses, in compilation of laws, translated the religious precepts which he found in the sacred books; the author does suggest such to be an exaggeration while at the same time that the two are in very close agreement (moral law of the Egyptians and the precepts of the Decalogue).[4]

The Schyen Collection of Oslo and London

Hieroglyphics (skhai en neter tur – writing of sacred words) are composed of signs representing objects of the physical world; these were always sculptured or painted and the linear generally used on the earlier papyri containing funeral rituals. There are four classes being[36]: