What we are left with, however, is one of the most elaborate catalogs of pure fakes ever produced. This work is all the more interesting since most of the lamps were custom made with the intention of selling them to this one collector, who for decades constituted a market unto himself.

Certainly looks much better than these fakes which we so often see. 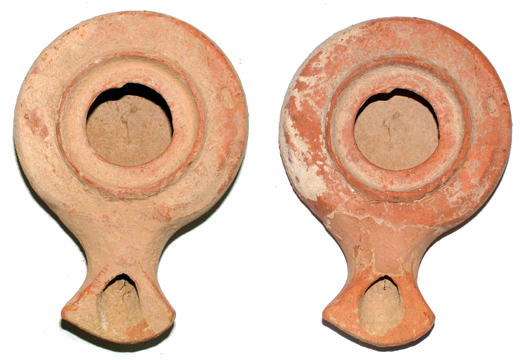 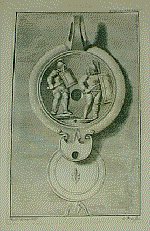 Many people are surprised that that rather ordinary, commonand very plentiful ancient oil lamps which can be acquired for little money are also widely faked.

Are there any genuine Hathor lamps actually?

I suspect the dealer had a Darom lamp missing its nozzle and got someone to bodge on a broken-off nozzle from a Herodian lamp.

A. Cleaning away applied dirt with dry brushing reveals shiny glue residue, most predominant on the side and on a protruding piece of clay inside the nozzle itself. 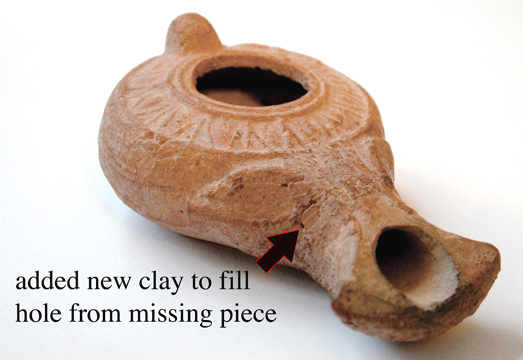 There is nothing new aboutfake oil lamps, or indeed about fake ancient artifacts!

The original nozzle of a Darom lamp of this variety should look more like this: 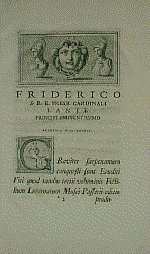 Below: Back view of the new clay around the nozzle to smooth over the reglued joint. Note that the new clay overlaps the ancient calcification on the lamp back. No question that this is no ancient repair!

Fakes and forgeries in Classical pottery

Here are some which have been sold in recent times. Mostly on eBay.

I have a strong suspicion that the Repaired Lamp 3 discussed by stevendom has actually fared even worse that he thinks. I suspect that rather than just having had a broken nozzle reglued, missing areas filled in with new clay, and a color layer and artificial dirt applied … the nozzlemay in fact be not only from another lamp entirely but not even from the same type of lamp.

Center above: Lamp 2 after careful cleaning with dry brush, revealing new clay around the nozzle to smooth over the reglued joint.

Whereas the lamp itself is a typical mouldmade Darom type (northern variety), the nozzle appears to be from a wheelmade Herodian type (see the lamps above it) and has characteristics of that type which are not found on this variety of Darom nozzles: extremely pronounced splay, squared edges, downward slope to the top surface, etc. – plus it is too long.

There is some sort of distinction in that! 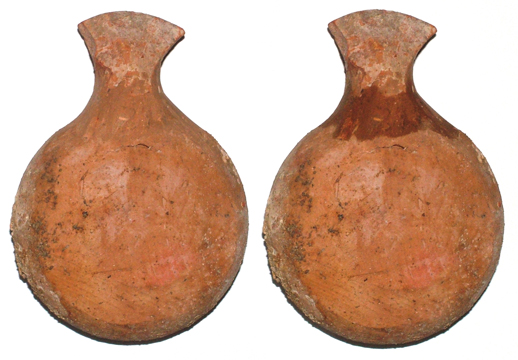 If you are thinking of buying ancient clay artifacts, I hope this information helps you in some way. I hope you have at least found it interesting. God bless…

You see, the thing about terra-cotta is that it is very difficult to tell an old piece from a new piece which has been made to look old, especially if you are an enthusiastic, overly credulous collector who thinks that he has stumbled onto a wide variety of new and unique forms. 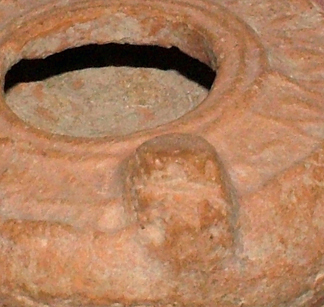 This page is provided to demonstrate how ancient artifacts are often reassembled after breakage and the repairs disguised. In this case we are looking at Herodian era terra-cotta oil lamps from Israel. The 3 lamps below were all acquired from an antiquities dealer thereand were represented when sold as being in original intact condition original, uncleaned, and unrepaired.

Left above: Herodian lamp 1 as displayed and sold by an antiquities dealer in Jerusalem, with artificially applied dirt to hide repairs.

Some fakes are made from moulds taken from genuine lamps but many others are pure invention.

Center above: Lamp 1 after careful cleaning with dry brush, revealing new clay around the nozzle used to smooth over reglued joint.

They turn up on eBay from time to time sold honestly as modern creations.

The Fakebusters and other websites about fakery

Left above: A beautiful red terra-cotta Herodian lamp as displayed and sold by an antiquities dealer in Jerusalem, with artificially applied dirt to hide nozzle repairs.

You will not find anotherdealer in ancient lamps on the internet as well informed as David. 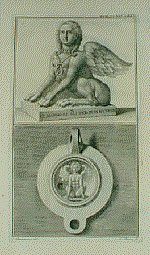 All of these fake Hathor lamps come from a fairly large but ultimately limited range of moulds.

These Hathor lamps have been faked since before WWI and probably back into the 19th century. 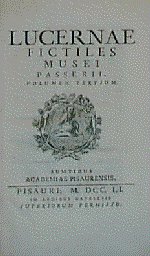 Could this one be real?; I know Larry collected only authentic artifacts during the 1950s, he was a well known collector of American Indian Artifacts, that were published in many collectors books. Real Egyptian who knows.

I dont think so. The style does not relate to anything else.None of thehandles ever looks convincing (this example looks utterly wrong!), the pared base relates to nothing else in Egyptian lamps, and so on. There are a few examples in museums but none has been scientifically excavated and museums used to have a cavalier habit of acquiring anything that came their way at one time. Bailey opines that they are all likely to be forgeries and I am sure he is perfectly correct. Museums tend to be more careful nowadays. The Met got rid of their example years ago!

Here is a Hathor oil lamp, all but a few of these are fake, but this one was in the Ex. Larry Lantz collection First Mesa IN. This shows very sharp and fine details.

Left above: Back view of lamp 1 after careful cleaning with dry brush, revealing new clay around the nozzle used to smooth over reglued joint. 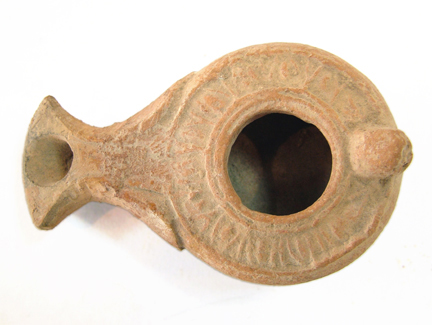 Below: The color layer has accidentally been applied inside a chipped off part of the handle! OOPS! But hey, the dirt layer will cover it up. 😉 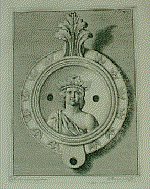 B. New clay is used to fill in a hole where original material is missing. A closer, more detailed shot of this repair is found immediately below.

Here is another, and it is shown on a university website!

Lamp 3 is a beautiful decorated Daroma lamp. The method of this repair is somewhat different, and may not have been performed by the same person. This lamp had a broken nozzle reglued, missing areas filled in with new clay, and a color layer and artificial dirt applied to hide the glue and new clay. The picture above is the lamp as it was displayed and sold by an antiquities dealer in Jerusalem. 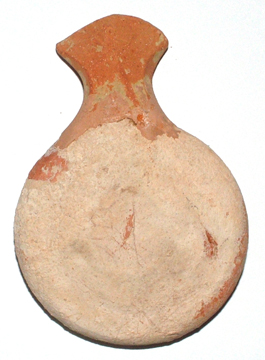 Passeri eagerly bought a wide variety of unusual specimens of Roman terra-cotta lamps from peddlers and excavators, and dreamed of establishing a classification system for them based on his own extensive collection. This three-volume catalog was to be the cornerstone of his efforts, and would have been, but unfortunately… 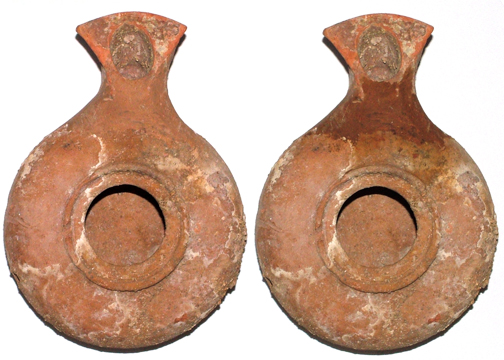 Scholars had always looked at the collection with some reserve, and by 1905 Walters noted that references to Passeris work have been avoided, as it has been shown by Dr. Dressel that nearly all those published by him are false. 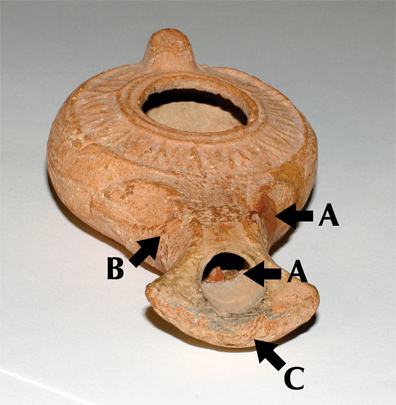