Emissions from Energy Consumption per $ of GDP

This graph represents production for primary energy. All units represent energy contents. No physical units such as mass or volumes are considered.

The site is, however, useful indeed!

I completed the data with US EIA for recent years and merged energy taxonomies and country lists.

The biodiesel and ethanol energy contents are calculated from volumes given in EIA data and represent lower heating values (net calorific content), the following density and calorific content are then applied:

Based on the outstanding work from Bouda Etemad and Jean Luciani who synthetized historical energy statistics, Olivier Rech and Aurlie Heyris had already started to digitalise fossil fuels production data when I joined TSP in 2010. I continued digitalising data concerning peat, nuclear, hydro and geothermal electricity.

Is the dataset on historical energy production available with the original data from Etemad-Luciani? In order to use the present dataset in this website we would have to know the specific country energy content established by EIA.

Long term perspective on energy supply is always an appreciated chart … but original data in a digital format used to be a scarce resource !

On the contrary, energy quantities under hydro, geothermal, wind, solar, tide and wave and biomass and waste energy correspond to raw electricity production. 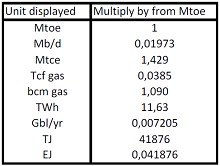