Middle Kingdom. 2055 1650 B.C. (12th 14 dynasties). This was a golden age.  The country was ruled by a number of strong kings who controlled not only all of Egypt but much of Nubia (the modern Sudan).  The Faiyum, a large fertile area around a lake which is fed from the Nile, was developed as a centre of agriculture.  The building of the great Temple at Karnak was begun.

Lower Egyptin the north was the richer kingdom.  The lands closer to the Mediterranean Sea were richer and more fertile.  Lower Egypt could trade with the lands of the Mediterranean.  The wood to build ships was brought from Lebanon from a very early time.

Second Intermediate Period c. 1650 1550  15th & 16th dynasties.  This was a period when the Hyksos, a tribe from outside Egypt (we do not know their origin) conquered much of Lower Egypt. 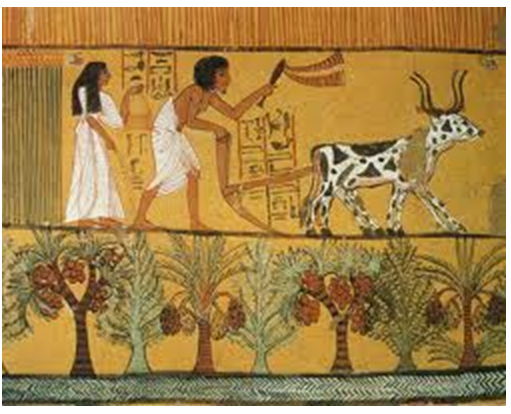 We can divide the history of Egypt into periods to make it easier to understand and remember.  When writing of ancient history we often say a date is, for example c.3100 B.C.; that little c. stands for the Latin word circa which means about.  We use it when we do not know the exact date.

Here we can see the Egyptian ships being loaded with the wealth they brought back from Punt; note the hieroglyphic writing which is telling the story of what is happening.

The civilization of Ancient Egypt lasted for more than 3000 years, longer than any other civilization known to us.  From 3500 B.C. (more than 5500 years ago) there were two kingdoms in Egypt:

Old Kingdom, from c. 2680 to c. 2180 (3rd to 6th dynasties) This period is best known for the building of great pyramids, including the huge pyramid of Giza which is the oldest of the Seven Wonders of the Ancient World (do you know what the other six are?) You can read more about the pyramids in Egyptian Architecture.

Records in temples of important events

Thirdly, Egyptians were ruled by kings, and queens, who were believed to be Gods.  Many of them built temples to commemorate the important events of their reigns.  Much of the history we have is carved in the stone on the walls of these temples, or found on large stone blocks inside. For example, Queen Hatshepsut recorded the expedition which she sent by sea to the land of Punt on a great wall relief in her temple.

The history of ancient Egypt lasted until the country became a Roman province in the 1st century B.C.

Every year rain further south in Africa and melting snow in the highlands of Ethiopia caused the Nile in Egypt to flood.  When the floods went down, the rich soil which the water had brought down from the mountainsides was left on the fields and caused them to be extremely fertile.  The Nile gave the civilization of Egypt its life.

How can we know about people who lived so long ago?

In this painting we see a man guiding a plough pulled by two animals, probably meant to be oxen.  You can see that he has a whip to make the oxen move.  Behind him his wife is carrying a basket of grain which she is sowing on the newly-ploughed ground.

Egypt was ruled before then by thirty dynasties, or families, of kings and queens, often called the pharaohs.  This is known as Egypts dynastic period.

Wall paintings and objects from tombs

New Kingdomc. 1550 1069 B.C. (17th to 20th dynasties) The Hyksos were driven out and the pharaoh regained power over Lower and Upper Egypt. During this period Egypt developed a very powerful civil service of royal officials.

First Intermediate period, from c.2180 to c. 2055 (7th to 11th dynasties). This was a time when several different kings ruled different parts of Egypt. At the end of this period Mentuhotep II, a king of the 11th dynasty, regained control over the whole of Egypt.

The Early Dynastic period c. 3100 to c.2680 B.C. The two kingdoms, of Upper and Lower Egypt, were united under King Narmer. This is really the first king whose name we definitely know, so he and his successors  are referred to as the First Dynasty (dynasty means a family who hold power).  From that time on the pharaohs are shown in paintings wearing a double crown, white for   Lower Egypt and red for  Upper Egypt.

The best-known of the systems of Egyptian writing (there were more than three) is the system using hieroglyphs, a mixture of pictures and glyphs or symbols.  The sentence above, written in ancient Egyptian hieroglyphs means, The crocodile eats the King.

Secondly, Egyptians believed that there was a life after death and that a dead persons body should be preserved and buried in a tomb with everything he would need in the life after death.  From the objects found in these tombs and from the wall-paintings on their walls, we learn much aboutEgyptian daily life.

Late Periodc. 1000  32 AD  (21st to 30th dynasties).  Egypt again was divided into two kingdoms.  From around 700 B.C. Egypt was frequently invaded, by the Nubians, who formed a new dynasty, by the Assyrians, by the  Persians, by the Greeks under Alexander the Greats general Ptolemy (the Ptolemaic dynasty) and finally by the Romans.

As you can see we have plenty of sources for ancient Egyptian history (without sources it is not really possible to write about history). Now let us take a look at what we can learn from these sources.

First, and most important, the ancient Egyptians were among the first people to develop a system of writing.  They believed it was important to write down what was happening.

Ancient Egypt depended on the waters of the River Nile, which flows through harsh and arid desert.  Only the land on the banks of the Nile could be cultivated to support life.  The rest of Egypt was, and is, desert.

Upper Egyptin the south had only a very narrow strip of land which could be cultivated.  The rest of the land was dry desert.  Upper Egypt, however, was closer to the land of Nubia.  The kings of Egypt sometimes traded and sometimes made war on Nubia.  Nubia was a source of rare wild animals, of gold, of animal skins, and of slaves.

The ancient Egyptian civilization lasted for more than 3000 years, longer than any other civilisation in human history.  Although we are talking about a period that began more than 5000 years ago, we know a great deal about ancient Egypt.