Retail companies of the United States

, is a privately held corporation that designs, manufactures, and sells portablelighting, fixture lighting, home dcor items and a variety of other related products. Its worldwide headquarters is located in the Chatsworth district of theSan Fernando Valleyregion of the city ofLos Angeles, California.

The company was founded in 1976 in Los Angeles by President and CEO Dennis Swanson and his wife, Vice President and Designer Manja Swanson. Fromandmanufacture, the company moved intoretailand is now a full multi-channel retailer and the largest specialty lighting company in the United States. LAMPS PLUS maintains international offices and manufacturing plants, and its website was picked as one of the top fifty retail websites by Internet Retailer magazine in 2004. The company has made the top 200 of the list every year it has been published. In 2011, the Lamps Plus catalog app was selected as winner of the RIS Mobile App of the Year award for customer experience. In addition, Lamps Plus is a member of theBetter Business Bureau. The company and Dennis Swanson hold severalpatentsfor lighting design, including atorchierefloor lamp design with two adjustable side lights and a lamp having a low light level replaceable bulb. Dennis Swanson has also served as past President of the American Lighting Association. The company has worked with a number of industry designers and personalities, including industrial pattern designer Stacy Garcia, furniture and lighting designerSergio Orozco, lighting designer Robert Sonneman, artistThomas Kinkade, and the Los Angeles pop artist Ragnar.

Manufacturing companies based in Los Angeles

Originally the company was called Lamps R Us till they were sued byToys Usfor infringement.

2006 Inductee to the Lighting Hall of Fame Dennis K. Swanson 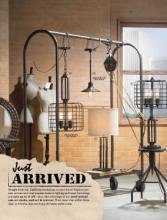