Please email us if you feel a correction is required to the Rome information provided. Please read the disclaimer

Information regarding ancient Roman maps has been added in a separate page together with a collection of maps of ancient Rome and maps of the Roman empire. 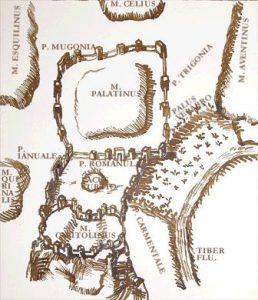 An interesting comparison may be had with the geography of ancient Pompeii which although close to the sea was essentially built on the side of a mountain on a spur of lava flow with a dominant position over the sea and the river Sarno.

Other hills have come to be virtually dug out or eliminated as part of continuous urban development, for example the Velia hill.

The marshes meant that the first inhabitants tended to congregate on the steep hills which had been cut out by erosion.

Information regardingancient Roman mapshas been added in a separate page together with a collection ofmaps of ancient Romeandmaps of the Roman empire.

Ancient Romes geography was in many ways the secret of its future success so much so that even Roman writers, including Cicero, recognized how fortunate the choice had been.

This type of rock is particularly prevalent on the north side of the city. A quick glimpse at a map soon reveals the existence of several lakes both to the north and south of the city: these are actually of volcanic origin and have filled with water. Lake Bolsena is one of the biggest volcanic lakes in Europe.

The cloaca maxima and other drainage systems are still in function and the flowing water within them can still be heard by those visiting subterranean Rome.

A copy of an ancient map of rome showing the Velabro marshThe marshy nature of Rome is largely hidden to the visitors eye although modern day Romans who own a cellar are well used to extremely damp conditions. The marshes are also clearly remembered as an integral part of the myth of Romes foundation. This particular marsh was known as the Velabrum.

A curious hill is Testaccio which in reality is a man-made hill entirely made of carefully laid out broken amphora pieces (the amphorae were the ceramic containers used for commerce). This hill per se gives a pretty good idea of the extent to which man has come to alter the original geography.

Insight into the Tiber River and the geology of ancient Rome

The marsh areas were drained and developed into the Forum Boarium the meat market and first port of ancient Rome. At that time the river was still navigable by Roman ships. Other parts of the marshes were drained to allow the city to grow between the hills. The most notable examples were the marsh between the Palatine and Aventine which became the Circus Maximus, with wooden seats along the hill sides of what was the marsh.

In the early days the hills were really hills, with time and continuous building works theyve tended to blend in to one another.See a simplified map.

The Geography of Ancient Rome was characterized by relatively steep hills on the left bank of the river Tiber, at the point where the river flowed around a small island (16m asl) as well as branching out into marshy areas between the hills. In a sense, the Tiber island itself is a hill. 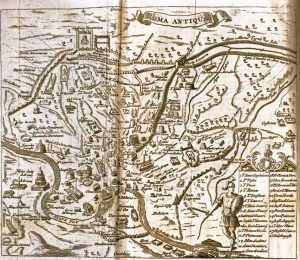 View Larger MapAs well as the lakes it is worth noting the roads leading out of Rome: by-and-large these still follow theancient Roman roads. 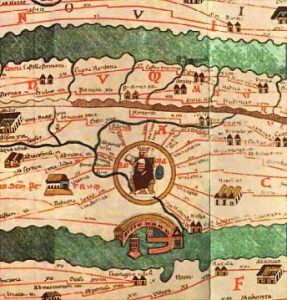 View Larger Map As well as the lakes it is worth noting the roads leading out of Rome: by-and-large these still follow the ancient Roman roads.

The first two hills to be populated were the Palatine and Capitoline but the city soon extended to include the Aventine, Caelius, Oppius, Viminalis and Quirinalis and others. The move across the river was largely prompted by military defence needs. Some of these hills were actually made up of a couple hills each with their own name. The most renowned across the river are the Janiculum and Vatican.

Further information about the geography of ancient Rome:

The citys low-lying position partly explains the general lack of high defense towers -the surrounding hills are higher anyway. The towers which were built through late antiquity and middle ages were later substituted by religious domes which, at least in spirit, bring the heavens down to earth or the spirit up to the heavens depending on your pov!

This type of stone was widely used for ancient Roman building and construction for example to build foundations, the earliest walls of the city or even as part of wall construction opus reticulatum. It is still widely used in modern day construction.

Perhaps Romes location has more in common with ancient Etruscan cities which, like Rome, relied on their access to the sea for international trade. It is Romes proximity to the sea which explains the relatively low height above sea level, the Tiber rivers meandering bends and the marshy nature of the land.

The extent of the marshes and the tendency to flood was at the root of the Roman ability for hydraulic engineering which actually they learned from the Etruscans whos kings ruled the city and area for some time. Flooding of the river (and city) was only put to a stop after high banks were built during the 19th and 20th century.

Being an area of volcanic origins the soil is naturally rich in water springs and minerals. The hills themselves were (are) largely made up of tufa rock a sort of hardened rocky sponge.

What is particularly interesting is that Rome, at odds with most other Italian cities, is built on a relatively low ground rather than on a dominating high ground. The lowest point of the city is at the Pantheon (approx 13m above sea level). The highest is Monte Mario hill (120 m asl).

Ancient Roman map. This section shows Rome at the centre of the Roman Empire