As the beam presses down upon the mash sacks, olive oil oozes into the collecting bowls. Notice the color is a brownish red. 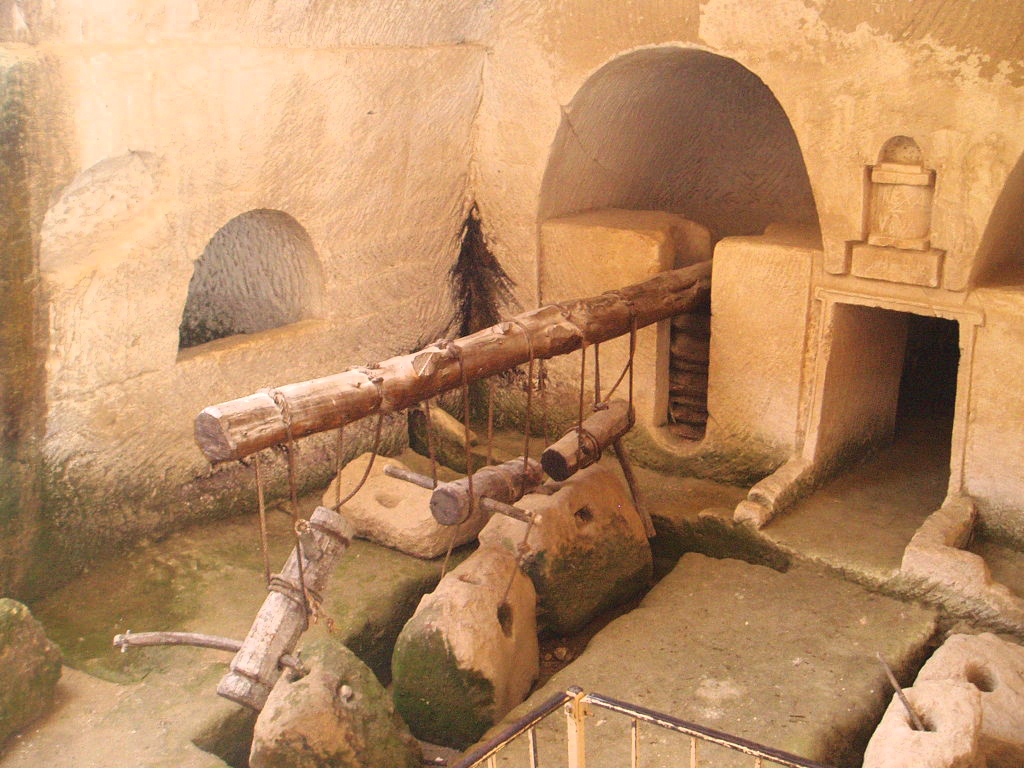 Wooden Levers and Rocks of a Press Beam

An olive tree with shoots coming from the roots of the tree.

In order to get a virgin oil, the crushed olives are not taken to the press (usually the next step) but are gathered and placed in a large container. Then hot water is poured over the crushed olives. The mixture is stirred and the oil separates from the meat of the olive and floats. The oil is then skimmed off by hand. Virgin oil is clear and free of impurities.

Second grade oil (which is more common and usually used for lamps) is produced by pressing the pulp. This is done in an olive press.To prepare for the olive press, the crushed olives are scooped up and collected into round baskets called mash sacks to be taken to the olive press. 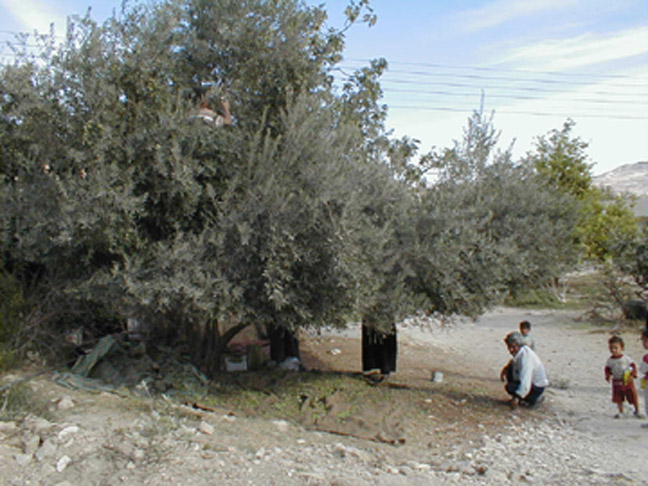 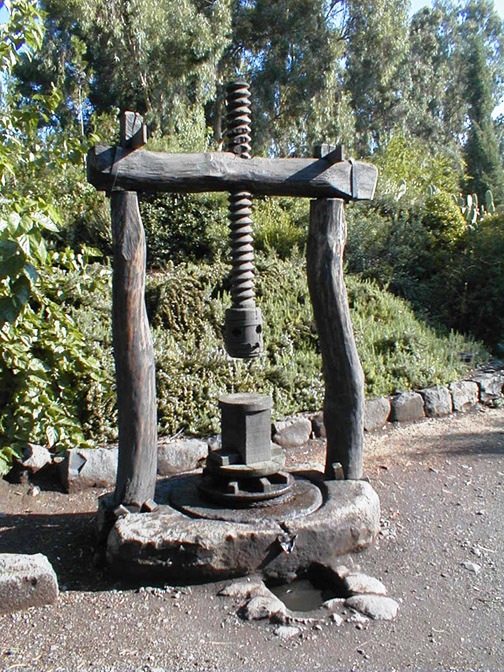 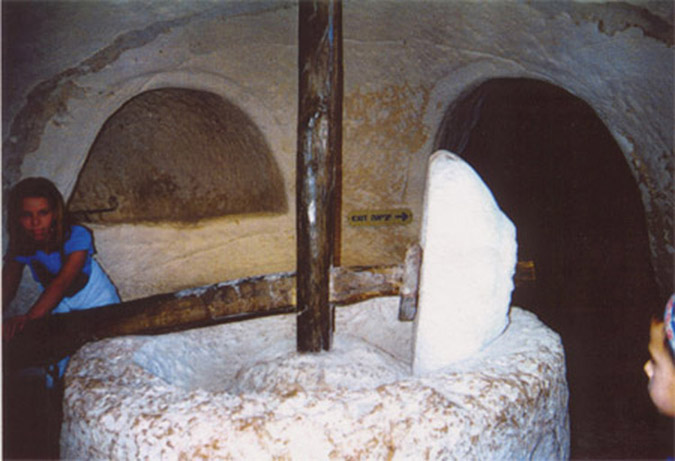 A few hundred years after the time of Christ, the screw press was invented. The press beam required a large space to locate it in. A screw press could be located in a smaller confine. This screw press is located in ancient Jewish village of Qatzrin in Galilee. 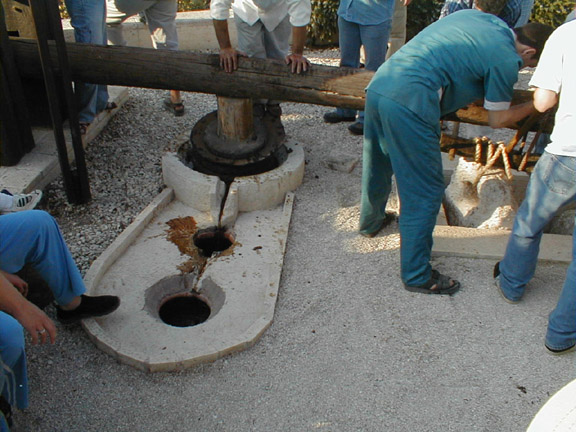 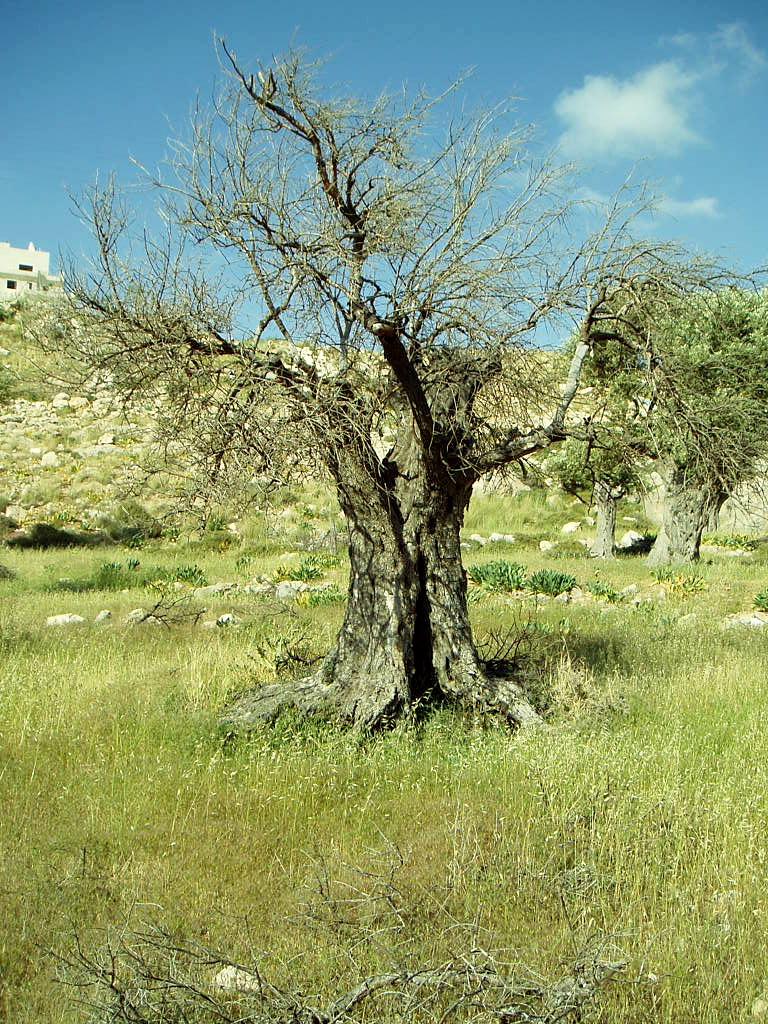 In this picture, shoots from the roots of the olive tree can be seen on either side of the tree. Shoots can also come from the stump of a tree cut down (as in the next pictures). It was this image that Isaiah had in mind when he said: And there shall come forth a rod out of the stem [Heb., stump] of Jesse, and a Branch shall grow out of his roots: (Isaiah 11:1)

Anciently, there were two kinds of olive presses. The olive press used in ancient Israel through the time of Christ was a press beam. The mash sacks were placed towards the front of the beam under a round pressing board. Large stones were used to weigh down the beam pressing upon the mash sacks. The oil would drain into collecting bowls – seen to the left of the round pressing board and mash sacks. This picture is of BYUs Jerusalem Centers press beam. 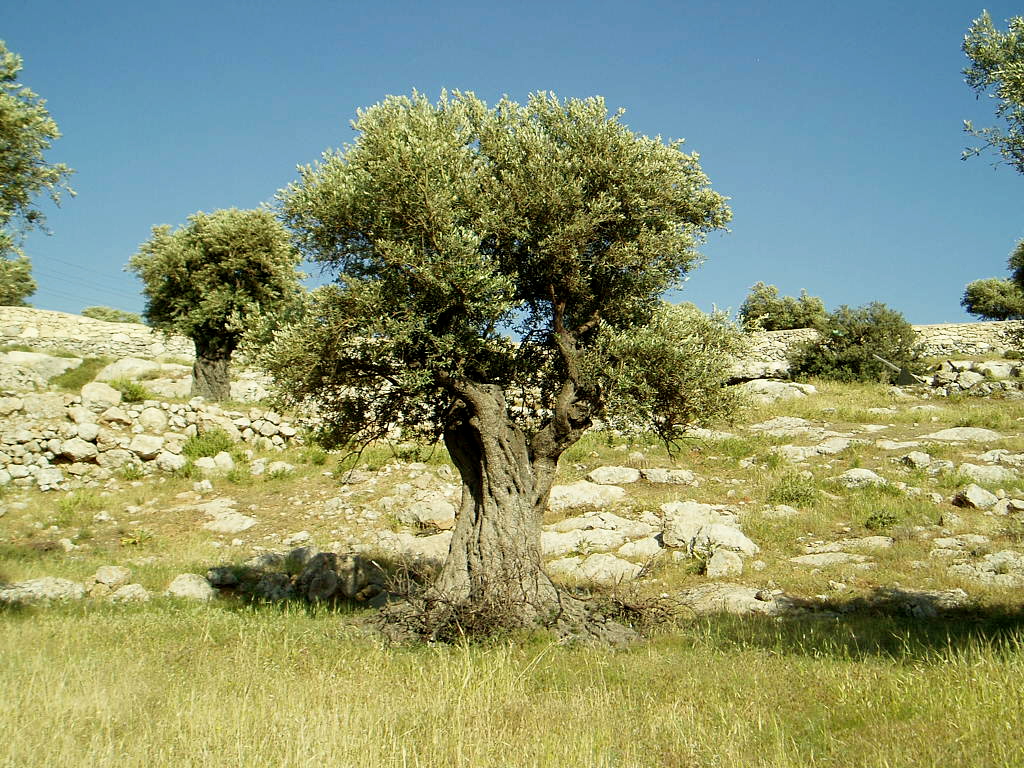 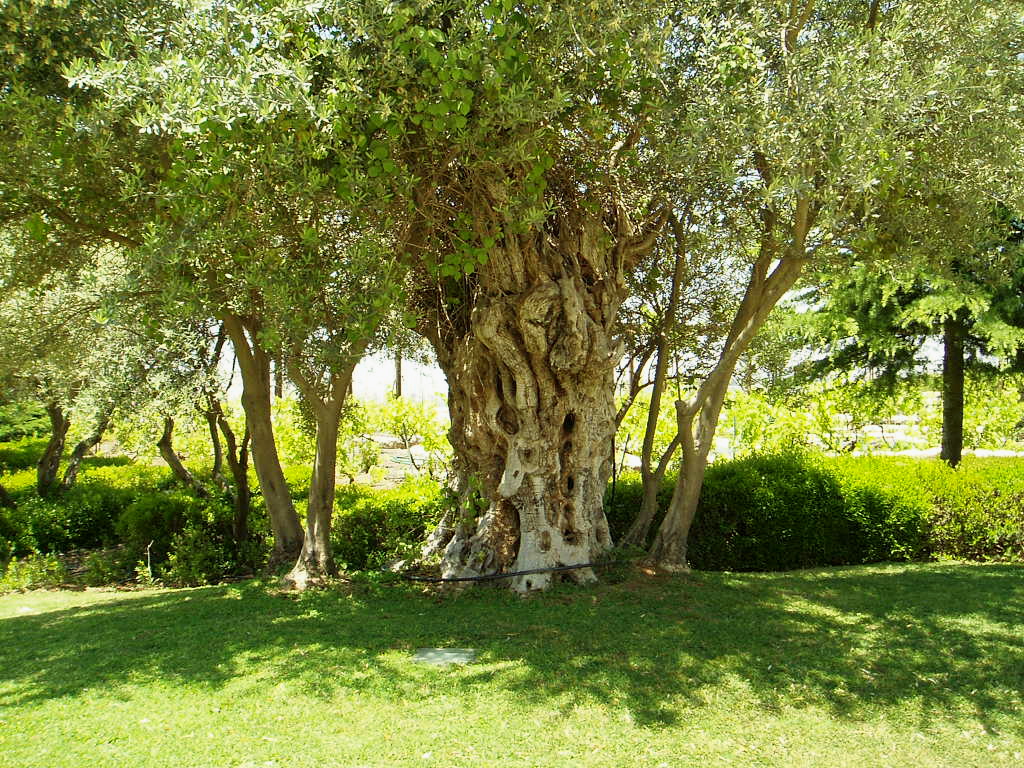 Olive Orchard with Hedges and a Watchtower

44 A certain nobleman had a spot of land, very choice; and he said unto his servants: Go ye unto my vineyard, even upon this very choice piece of land, and plant twelve olive-trees;

45 And set watchmen round about them, and build a tower, that one may overlook the land round about, to be a watchman upon the tower, that mine olive-trees may not be broken down when the enemy shall come to spoil and take upon themselves the fruit of my vineyard.

46 Now, the servants of the nobleman went and did as their lord commanded them, and planted the olive-trees, and built a hedge round about, and set watchmen, and began to build a tower.

Shoots from the stump of a cut down olive tree that have matured. 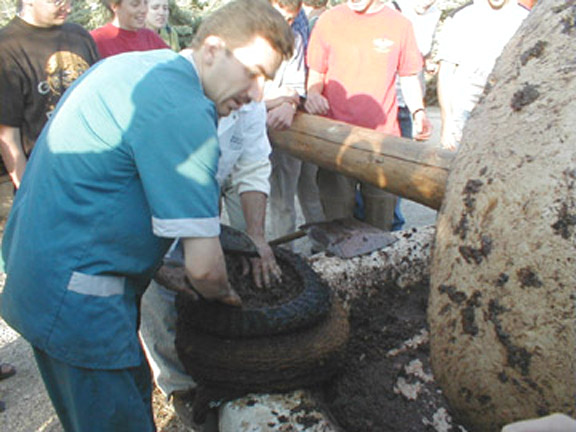 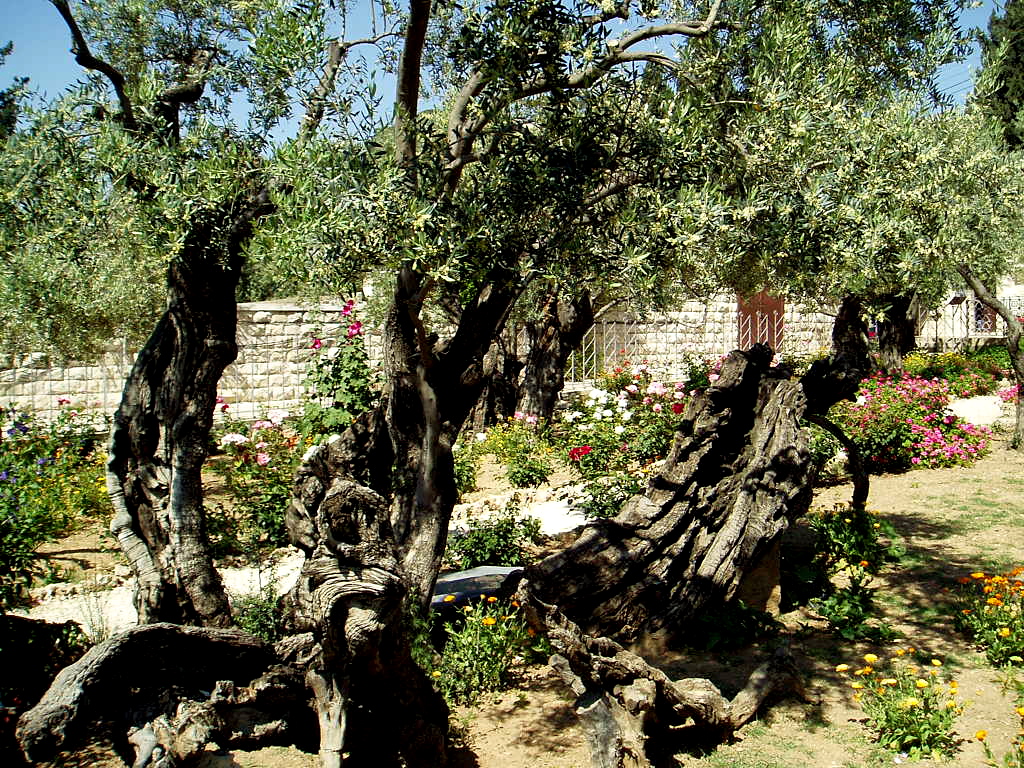 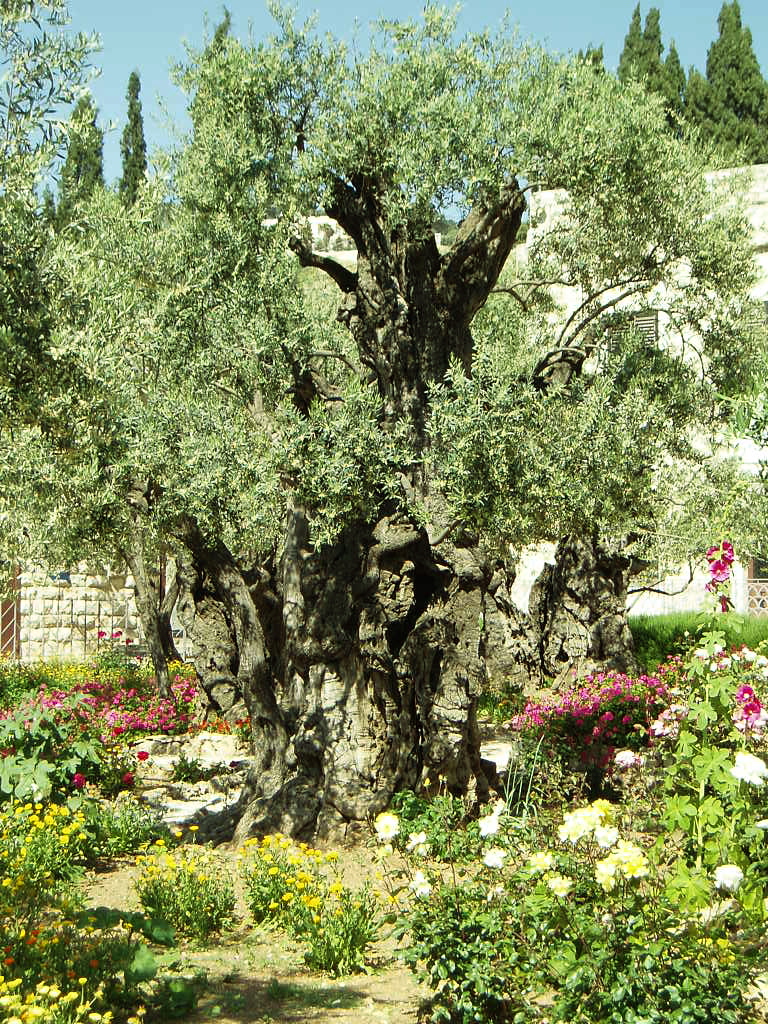 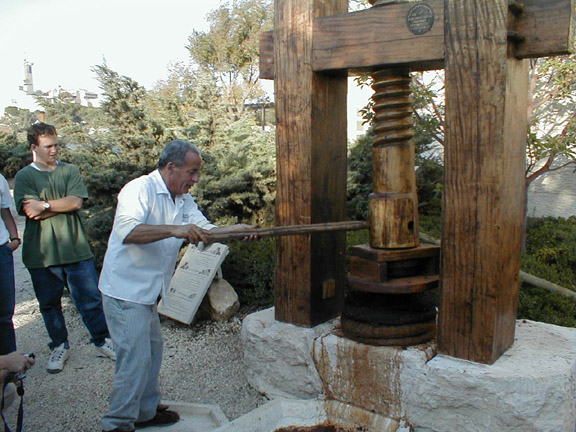 One of my students is placing the mash sacks under the press board on the press beam at the Jerusalem Center. 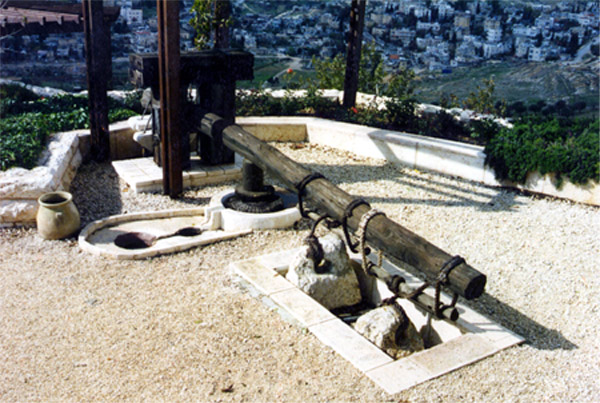 In ancient Israel, olive processing began with first crushing olives in an olive crusher. This is an authentic olive crusher at BYUs Jerusalem Center for Near Eastern Studies. 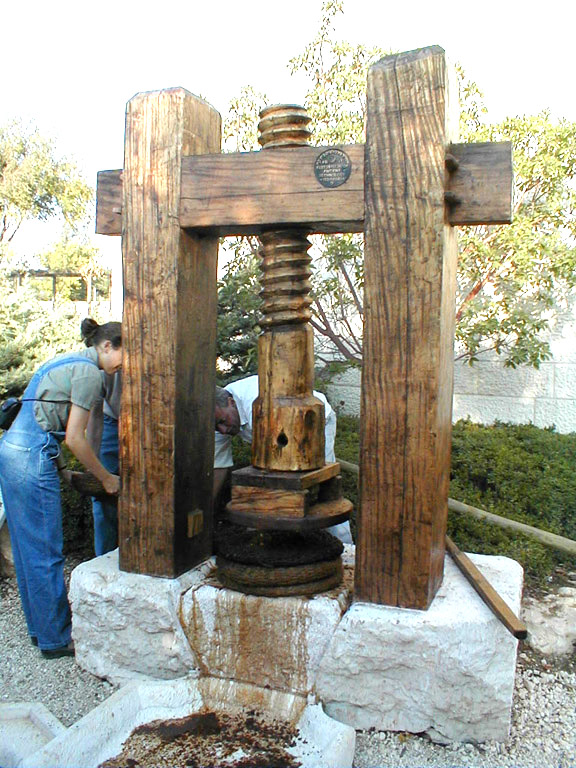 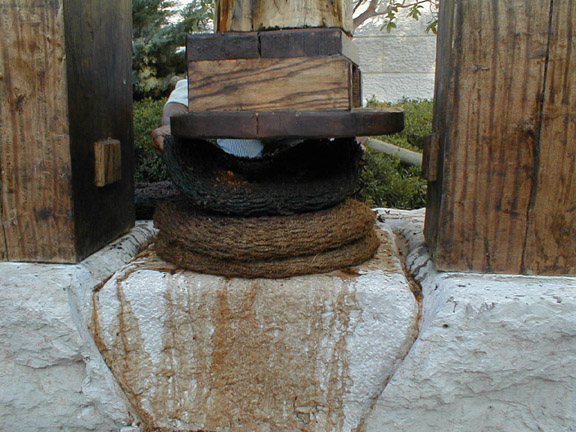 This is an olive tree with pruned branches around the roots of the tree.

Using wooden levers, the press beam is weighed down by rocks. By levering the rocks, the weight of the rocks pulls the press beam down forcing the press board to force out the olive oil from the mash sacks. 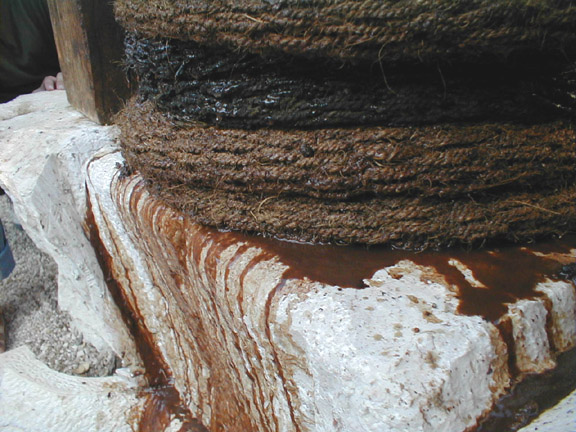 This is my daughter pushing the crushing stone at the ancient site of Meresha in Israel.

Harvesting olives from an olive tree. 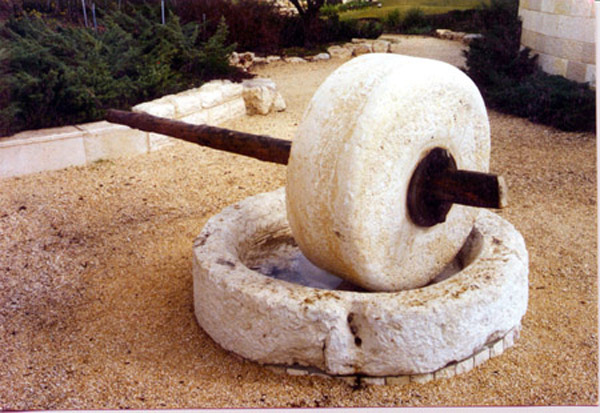 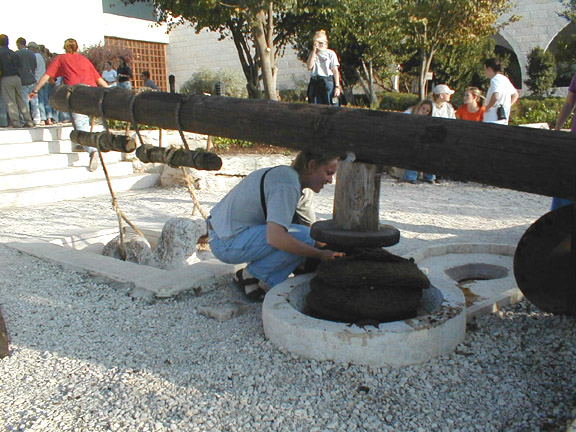 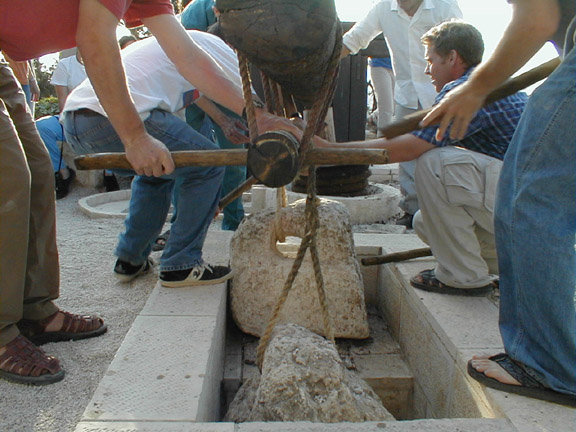 Shoots from the stump of a cut down olive tree that have matured.

Oil oozes down into the collecting trays. Note in this picture and the next the color of the olive oil is brownish-red nearly resembling blood.

To harvest olives, a large sheet is placed under a tree and then the limbs of the olive tree are beat causing olives to fall onto the sheet. The olives are then collected. 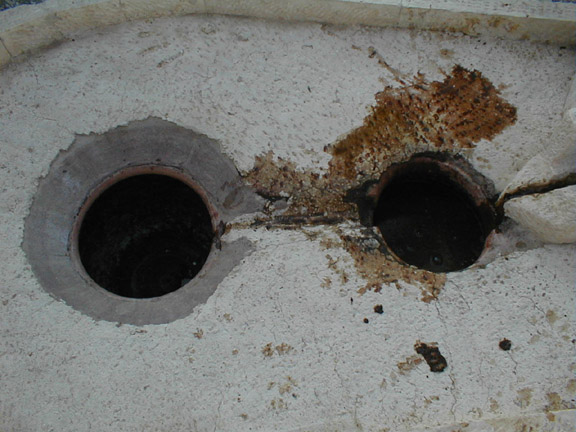 With the mash sacks placed under the press block the screw is tightened. Olive oil oozes down into the collecting tray.

The mash sacks are placed under the screw.