The olive tree is mentioned frequently in the Koran and in the Bible. Noah receives the message that land is near when a dove arrives at the ark with an olive branch in its mouth. Greek mythology associates the goddess Athena with the olive tree and credits Acropos, the founder of Athens, with teaching the Greeks to extract oil from the trees fruit.

The olive and the tree on which it grows have been revered since ancient times. Archaeological digs have unearthed evidence that olive trees existed on the island of Crete in 3500The Semitic peoples were cultivating the trees fruit by 3000They particularly liked to use the oil of the olive to anoint the body during religious ceremonies, and to light their lamps. An ancient Hebrew law prohibiting the destruction of any olive tree is still obeyed.

Benavides, Lisa. For Olive Importers, Its All Greek to Them.Boston Business Journal,October, 25, 1996, p. 3.

peak oil content approximately six months later. Thus, the olives are harvested from November to March, after they have progressed in color from green to reddish violet to black. It is often necessary to harvest olives from the same trees several times in order to gather olives at the same stage of maturation. 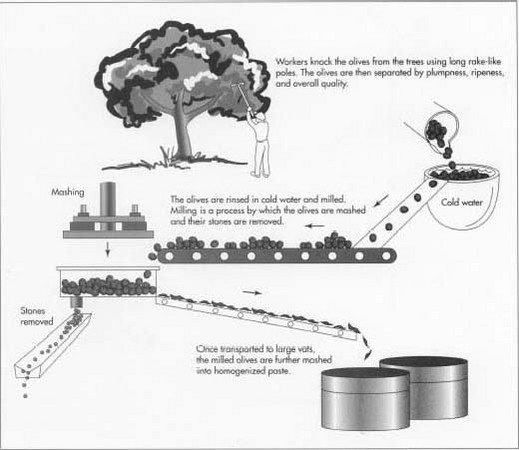 A member of the evergreen family, the olive tree features a gnarled trunk and leaves with a silvery underside. Its strong root system is perfect for penetrating sand, limestone, or heavy, poorly aerated soil. The trees thrive best in regions with rainy winters and hot, dry summers. Although it may take up to eight years before a tree produces its first harvest, a single tree can live for centuries.

6 Originally, the oil and water mixture was stored in vats until the oil rose to the top and was skimmed off. Some fermentation was inevitable, affecting the taste and smell of the olive oil. Today, the separation is accomplished swiftly by pumping the mixture into a centrifuge. The centrifuge is comprised of a rotating drum and an auger that are spun on the same axis at great speed. Because the oil and the vegetable water are of differing densities, the centrifuge forces them apart and into separate receptacles.

8 In many cases, olive oil distributors purchase the olive from the producers and rebottle it. Packaging has become more ornate as the popularity of olive oil has grown. It is not unusual to purchase olive oil in unusually shaped bottles topped with netting or rope. Some packagers also hire professional artists to design their labels.

4 The oil is extracted by loading the paste into a hydraulic press. The olive paste is evenly spread over hemp pressing bags or disks covered with synthetic fibers. Each bag or disk is covered with approximately 9-13 lb (4-6 kg) of paste. Between 25 and 50 bags or disks are stacked onto a press plate. Plate guides are inserted at intervals of five to six bags. The plates serve to maintain the balance of the stack and to distribute the pressure evenly. A piston pushes up against the stack, and the oil seeps slowly through the pressing bags to attached tubes. The solid material remains inside the pressing bags.

1 After the ripe olives have been combed from the trees, they are picked over by hand to weed out unsound olives. The olives are divided into categories according to their plumpness, state of ripeness, and quality. Then the olives are taken to the press and stored for a short period of time, from a few hours to several days. The period is short enough to prevent fermentation but long enough to allow the olives to get warm so that they release their oil easily. 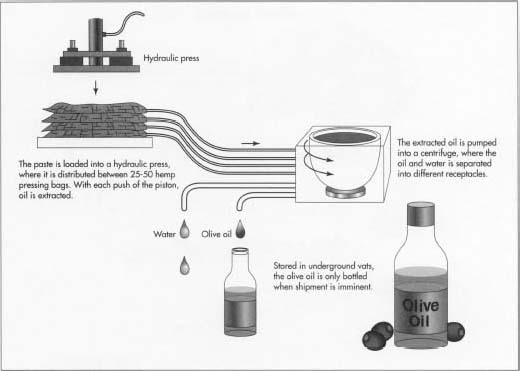 In the late twentieth century, emphasis on good nutrition and a fascination with the so-called Mediterranean diet has resulted in a resurgence in the olive oil trade. Olive oil is touted as a monounsaturate that is healthier for human consumption than corn and vegetable oils. The oil is also promoted as a dandruff reliever and, when mixed with beeswax, a homemade lip balm. In the late 1990s, the United States and Canada consumed olive oil at a yearly rate of 147,600 tons (150,000 metric tons). The demand often exceeds the supply, and during the 1990s prices rose significantly.

2 The olives are rinsed in cold water and then passed along a conveyer belt between rollers or continuous hammers. This machinery, often called the olive crusher, breaks down the cells and de-stones the olives. Depending on the resiliency of the olives skin and the stage of maturation, it may be necessary to pass the fruit through the mill a second time.

Separating the oil from the vegetable water

The primary ingredient of olive oil is the oil that is expressed from ripe olives. In the late spring, small flowers appear on the olive trees. Wind pollination results in the blossoming of the olives, which reach their

Since ancient times, workers have knocked the fruit from the trees with long-handled poles. The process has not changed significantly over the centuries. Modern poles resemble rakes. Originally, nets were spread under the tree to catch the falling olives. Many producers are now using plastic covers to cushion the fall and to allow for cleaner, faster gathering.

5 The term cold-pressing refers to the fact that the oil is extracted without heating the paste, furthering insuring the purity of the oil. The oil that is expressed is a reddish mixture of the oil and the inherent vegetable water. This is the oil that receives the appellation of extra-virgin olive oil. The paste is removed from the bags and run through several more presses to obtain the lesser grades of oil that remain.

Early oil producers pressed the olives by crushing them between huge cone-shaped stones as they turned slowly on a base of granite. Today, most factories employ hydraulic presses, exerting hundreds of tons of pressure, to separate the oil from the olive paste. Spain and Italy are the primary commercial producers of olives and olive oil. Greece is close behind them. However, California, Australia, and South Africa are emerging as leaders in the industry. Some wineries are planting olives to offset poor wine harvests. Ironically, olive trees were planted in California by missionaries in the 1800s, which by the turn of the century were producing an excellent grade of olive oil. However, the market demand was weak so the trees were uprooted and grape vines were planted in their place.

Creating an olive paste through malaxation

From the Olive Tree to Olive Oil. Pompeian, Inc.

The olive oil industry is regulated by government food agencies, such as the Food and Drug Administration (FDA) in the United States. By regulation, olive is classified into five grades. Virgin olive oil is that which is obtained from the first pressing. Pure is a mixture of refined and virgin oil. Refined, or commercial, consists of the lower grade lampante oil from which the acid, color, and odor have been removed through processing. Lampante is a highly acidic grade; its name is derived from its use as lamp oil. Sulfide olive oil is chemically extracted from the olives through the use of solvents and is refined many times.

The popularity of olive oil in the late twentieth century has spawned many bottlers who are combining various grades of olive oil and labeling them illegally as virgin or pure. A 1995 FDA report charged that only 4% of the 73 domestically produced or distributed olive oils it tested were pure. The North American Olive Oil Association disputed the findings, stating that of the 300 oils the association tests each year, only a handful are found to be impure. In any event, the situation has become one of buyer beware.

7 The oil is stored in underground vats until it is ready to be shipped. Then the oil is canned or bottled on an assembly line. Cans or dark-tinted bottles will keep the deep-green color of the olive oil intact. Oil placed in clear-glass bottles will fade to a yellowish-green. However, the flavor is not affected.

By the time of the Roman Empire, olives were a mainstay of the agricultural economy. The Romans also used the oil to grease the axles of wagons and chariots. The Greeks traded it for wheat; the elaborately decorated clay pots that they used to transport the oil became part of the civilizations burgeoning art industry.

Finding workers who are willing to perform the laborious task of picking olives is becoming more difficult. Therefore, the olive oil industry is pursuing methods for mechanizing the collecting process. Among the larger olive oil companies, centrifugation methods are becoming more popular for the pressing process as well as for separating the oil from the vegetable water. Although centrifugation requires more energy and water, the method takes up less space in the factory and requires a shorter set-up time. Centrifugation also eliminates the need for pressing bags, which must be washed after each pressing.

3 In ancient times, the olives were mashed into a paste with a simple mortar and pestle. This principle was expanded upon until the stone mortars were large enough to require slaves or pack animals to operate them. In the modern process, the milled olives travel from the mill into vats in which slowly turning blades mash the olives into a homogenized paste.

Cold-pressing the olive paste to extract the oil