This year in the Galilee, thousands of Israeli students are excavating and organizing the first smart trail, in which dozens of stones n the trail will transmit information and activities to hikers mobile telephones.

.The lamp, adorned with an eight-branched menorah

Immediately after Independence Day, there will be a week of activities inaugurating the Sanhedrin trail. The week will be marked by free activities open to the public, as well as events attended by thousands of school children.

A unique web application that will serve as a readily accessible independent guide for those hiking the trail in the spectacular landscapes of the Galilee, offering a unique hiking experience for families, individuals and groups.

The trail will be presented as a gift to the country as part of the celebration of its 70th year of independence. It coversa distance of 70 kilometers (43.5 miles)and is divided into sections, tracing the movements in the Galilee of the countrys greatest figures, the 70 sages of the Sanhedrinwho rehabilitated the Jewish people following the Bar Kokhba Revolt. Like them, the trail crosses the Lower Galilee from Beit Shearim to Tiberias.

Dozens of large smart stones, each constituting a kind of relay station situated along the trail, will transmit relevant useful information and activities directly to the hikers mobile telephones. The new web application communicates with the stones, offering information about the recent and ancient history of the Galilee, flora and fauna, landscape, observation points and attractions.

The Sanhedrin settled in Usha, and then moved n to Shefarʽam, Bet Shearim and Zippori until it was finally established in Tiberias. The route the Sanhedrin Trail follows is divided into sections for the convenience of hikers; it crosses the Galilee along nature sites and through magnificent landscape, such as Nahal Zippori, Yodfat, Mount Arbel, Mount Atzmon, and others.

During the excavations, students uncovered material remains from the time of the Sanhedrin: evidence of the glass industry that is also mentioned in rabbinical texts, as well as ornamental items dating back 1,800 years.

A particularly special surprise that was discovered while excavating the trail was an intact oil lamp decorated with the menorah symbol, dating to the Byzantine or Umayyad periods.

This is a flagship project that connects the future generation preparing the trail to its heritage and to the Jewish peoples great and inspiring leaders. The trail is a groundbreaking endeavor utilizing state-of-the-art technologies in order to connect with our roots. The project will be further developed in the coming years, creating continuity from the distant past to the future, which will be used by hikers in Israel today and, hopefully, future generations as well.

Students examine the Sanhedrin Trail web application next to one of its smart stones.Yaniv Berman, Israel Antiquities Authority

The application, which is currently in an advanced stage of development, is already operational, and can be used while hiking along parts of the trail.

Another fascinating discovery that occurred during in the excavation of the trail is that of Ilai Yonah, a student at Hamoshava High School in Zikhron Yaʽakov, who found a gold coin n the trail. The coin bears an inscription of the sultan Suleiman the Magnificent, builder of Jerusalems city walls. nly two others such coins exist in the State Treasures.

Students prepare hiking trail as a gift to the State, uncover ancient oil lamp adorned with a symbol of a menorah. 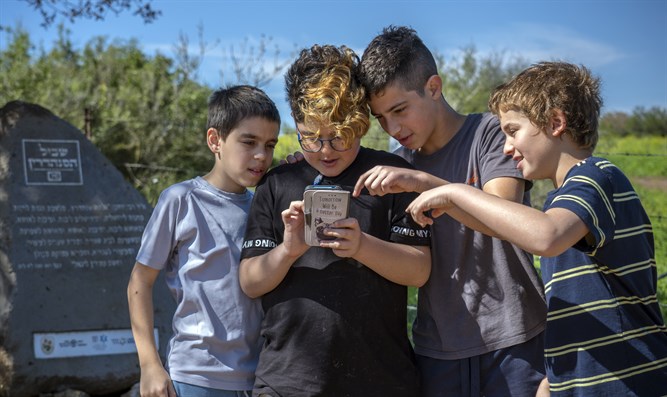 The discovery of a lamp decorated with a menorah, a symbol of the Jewish people, is without doubt exciting, especially at a site with such a unique heritage in part of the Sanhedrin Trail.

Dr. Einat Ambar-Armon, an IAA archaeologist and an expert n ancient clay lamps, said, Unlike the modern day symbol of the state in which the Temples menorah is depicted with seven branches and a single broad base, the menorah engraved n the ancient lamp has eight branches and a three-legged base.

IAA archaeologist Yair Amitzur, who conceived the idea of the trail, said, The Sanhedrin Trail is a huge project incorporating within it the values of nature, environment and history and is where the cultures of all of todays populations in the Galilee meet. There is no other a trail in Israel that utilizes such an application, and in this respect, we the archaeologists are making history.

IAA Director Israel Hasson said, The new trail and the discoveries along it are a celebration for the citizens of Israel n the occasion of 70 years of independence and a gift from thousands of young people who invested so much of their energy in developing it.

While working, the students unexpectedly found a 1,400-year-old oil lamp bearing the symbol of the Temples menorah.