Emery (1972) suggests that the artifact may have been carved in the imitation of a metal vessels form, with a center hole that was originally designed to fit on a pedestal.

In spite of the complexity of this problem, the subject has become even more serious as a result of the technical studies that a variety of investigators have made, impelled by the surprising and strange design of this device.

Bearing in mind that it is of pre-dynastic date, circa 3000 BC, it represents supreme ability in working hard stone, the lobes looking as though they had been bent over. Indeed, it is possible that it is a copy of an original copper artifact. 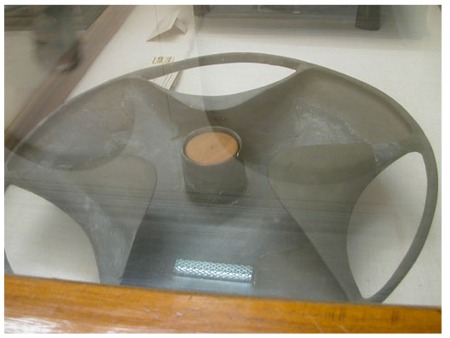 This strange object has disturbed and continues disturbing all the Egyptologists that have had occasion to study it at great length. The first of them was its discoverer, Brian Walter Emery, one of the most important Egyptologists of 20th Century and the author of a classic volume on Egyptology, Archaic Egypt, that continues to be, after many years, an important bibliographical reference for the study and an understanding of the origins of the Old Egyptian Civilization.

Years later, in his previously mentioned work, Archaic Egypt, he commented on the object with a word that perfectly summarizes the reality of the situation and the discomfort the object causes; cachibache (a small hole that threatens to become a much larger hole)…

As well, the Egyptologist Cyril Aldred reached the conclusion that, independently of what the object was used for or what it represented, its design was without a doubt, a copy of a previous, much older metallic object.

Be that as it may, this object found in a tomb of Sakkara with an age at a minimum of 5,000 years, continues to constitute one of the most perplexing Egyptian and ancient mysteries.. Translated from the Italian by , Ciao! Source: EgiptoOculto

One of the most unusual pieces is a strange circular object, fashioned in schist and with a central hub which gives it the appearance of having been designed to fit onto a pole. 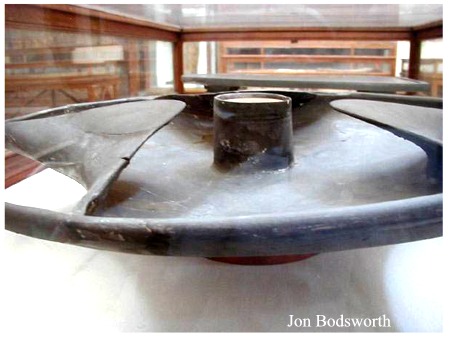 As it is well known by all, the official position maintained by Egyptology with respect to the appearance and use of the wheel on the part of the Egyptians, is very clear and leaves no room for doubt. The introduction of the wheel in Egypt they assure us, coincided with the invasion of the Hicsos at the end of the Medium Empire, in 1640 B.C.,

They used it, on among other things, their military chariots.

In fact, this schist wheel appeared in Tomb of Prince Sabu, along with other strange copper objects, practically the only metal that the Egyptians then knew.

One theorist who has attempted to explain its function is William Kay, an English engineer. He has suggested that it was actually a ritualistic tri-flamed oil lamp.

In the first wing of the Egyptian Museum of the Cairo between two rooms close to the Momias Room, one cannot help but be surprised to see in a small display cabinet, although not without some difficulty caused by the reflections of the light on the crystal that covers it, a solitary object similar to a wheel or stone disc.

A wick system comprising six bundles of rushes, bound together, were held in place by the lobes and thus kept immersed in the oil. If the ends of the four bundles were separated sufficiently, then twelve separate flames may have resulted instead of three.

A satisfactory explanation has not yet been obtained on the peculiar design of this object….

According to the typical and expected view of the archaeologists and pro-government Egyptologists, this object is no more than a tray or the pedestal of some candelabrum, with a design a product of blind chance.

Between utensils of funeral objects that were extracted, Emerys attention was powerfully drawn by an object that he initially defined in his report on the Great Tombs of the I Dynasty as: … a container in the form of schist bowl….

William Kay has suggested that the vessel was a ritualistic tri-flamed oil lamp, in which bundles of rushes, immersed in oil, acted as the wicks.

The question then is inevitable: if it is not a wheel, what is the strange object that appeared in the Tomb of Prince Sabu, 1,400 years before the invasion of the Hicsos?

Tubes of rock were used by the ancient Egyptians to hold round-bottomed vessels, and there are many examples of these throughout the dynastic Egypt, including from the Early Dynastic Period (El-Khouli 1978).

These bundles of rushes were held in place by the lobes, and the vessel was suspended on a pedestal inserted through the center. Whether it was actually used for this purpose is uncertain.

This detail, next to the excellent orifice in the central part, makes us also suspect that this object is only a small part of a more complex mechanism, and that it was saved thanks to a stone reproduction for some unknown reason, made by an artist, with unknown tools.

Salvation. What Must You Do To Be Saved?

The doubt that has been plaguing us is wondering how the ancient Egyptians could design so delicate and complex a structural object more than 5,000 years ago.

This object is approximately 61 centimeters in diameter, and 10.6 centimeters in height in the center. It is made of schist, a very fragile and delicate rock, which requires very laborious carving.

There Were Giants In The Earth in Those Days

A structure that in the case of the three strange cuts or curved shovels, induces one to think almost immediately about the use of this object in an average liquid. 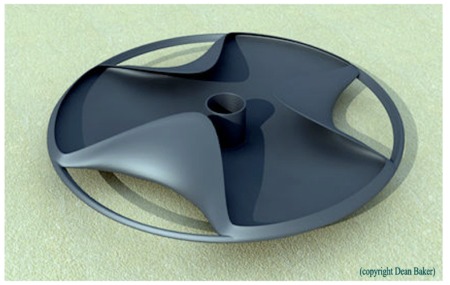 Although by chance, this peculiar object closely mirrors the design of one of the pieces that Lockheed developed to be fitted hermetically within a full case of lubricant.

Possible competition between metal and stone vessel artisans may have been one of the reasons for the development of artistic expression in ornamental stone vessel forms during the Early Dynastic Period (El-Khouli 1978).

Weve translated this article from the Italian. Another translation that readers may find useful—used for ceremonial;funereal;ritualistic;shamanistic etc. purposes -often means; we dont know what it was used

Its form resembles that of a plate or a concave steering wheel of a car, with a series of three cuts or curved shovels that resemble the helix of a boat, and in the center, an orifice with a rim that acts as the outside receiver of some axis of a wheel or some other unknown mechanism, arranged to turn.

But…, what mechanisms existed 5,000 years ago in the Valley of the Nile?

The numbers 3 and 12 are recognised as having symbolic significance for the ancient Egyptians. Bill Kays concept seems entirely reasonable, especially in the light of a pole-supported oil lamp from Deir el Medina, also exhibited in the Cairo Museum.

Making excavations in 1936, in the archaeological zone of Sakkara, he discovered the Tomb of Prince Sabu. He was the son of Adjuib Pharaoh, governor of the I Dynasty (3,000 B.C.).

The fragile nature of such an intricately carved stone object greatly limits is practical usage and suggests a purely ornamental function, being of a religious or other such ritualistic purpose.