After 1866, The Scovill Company furnished the United States Mint with the blanks for a number of U.S. coins in various metals – copper, nickel and bronze. Scovill furnished the full set of 23,757 medals for the Columbia Exposition in 1893.

and spread of daguerreotypy in the United States, Scovill began to manufacture the silver-plated copper sheets used in the process around 1842.They quickly became a key producer of daguerrotype plates and other photographic items. It appeared to be a very lucrative business, and for this reason, among others, Israel Holmes set forth and organizedHolmes, Booth & Haydensto provide some competition to Scovills and try to capitalize on some of the perceived profits. Scovill acquired American Optical Co. in 1871, after which they became Scovills primary camera manufacturer. American Optical Co. stamped cameras, were constructed of finer woods, had a better finish and were more costly. Scovill Waterbury cameras were less expensive, catering to the newly formed amateur market. In 1889 the photographic business was made an independent corporation under the name of the Scovill & Adams Company. 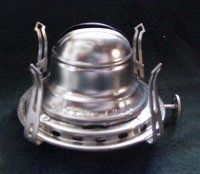 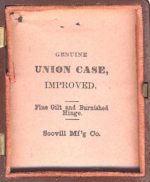 In 1903, the Scovill Companypurchased and absorbed the manufacturing capacity of theMatthews and Willard Manufacturing Companyof Waterbury. Mathews and Willard were originally formed in 1848 to manufacture saddlery, harness and carriage trimmings. They are also known for some lamps and parts. In 1923, Scovill purchased the American Pin Company and the Oakville Company, both from Waterbury and the Hamilton Beach Manufacturing Company of Racine, Wisconsin. In 1925, they purchased Morency-Van Buren Mfg. Co. of Sturgis, Michigan and in 1926, the Gilchrist Company of Newark, New Jersey.

The Brass Industry in the United States

and Israel Holmes both entered the employ of Leavenworth, Hayden & Scovill. Croft ultimately traveled to England to procure better machinery and an expert toolmaker. Holmes, who had experience as a salesman, was in charge of the companys store in Waterbury. Business increased and operations expanded. On April 4, 1827, the firm of J.M.L. & W.H. Scovill succeeded Leavenworth, Hayden & Scovill when William H. Scovill bought out Leavenworth and Haydens interest. In 1829, following in the footsteps of Benedict & Burnham, Scovills began to roll their own brass. From the very beginning, the company was known to use much of their own brass for the remanufacture of their other product lines. Israel Holmes left J.M.L. & W.H. Scovill in 1830 to form Holmes & Hotchkiss. In 1840, J.M.L. & W.H. Scovill became known simply as Scovills & Company.

teamed up with the Grilley brothers, Henry, Silas and Samuel, in 1802 to form Abel Porter and Company. The company began in much the same way asBenedict & Burnham, albeit much earlier – their primary business was the manufacture of buttons from sheet brass. In 1806 Levi Porter sold his interest in the company. Two years later David Hayden was taken into the partnership. That same year they erected a larger facility and switched from horses to water power to run the machinery. Silas Grilley sold his interest in 1809 and on September 11, 1811, with all of the original partners retired, a new partnership was formed by Dr. Frederick Leavenworth, David Hayden and James Mitchell Lamson Scovill under the name of Leavenworth, Hayden & Scovill.

[ additional patents will be added as they are discovered ]

was assigned at least eighteen lighting-related patents between April 4, 1844 and April 20, 1920. See thepatent tablebelow for details. One noteworthy inventor was named Sterne Russell, assignor of seven patents to Scovill Manufacturing Company. One of the most readily recognizable and mass marketed burners, the Queen Anne, was manufactured by Scovill. The burners are almost always marked SCOVILL MFG. CO. on the thumbwheel and QUEEN ANNE on the deflector. Scovill likely produced under contract as these burners are often found marked on the deflector: RAYO QUEEN ANNE, REIDS PERFECT, or WHITE FLAME LIGHT COMPANY GRAND RAPIDS MICH. Some of these variants have the SCOVILL thumb wheel, others are marked MADE IN USA. Queen Anne burners are featured in the Standard Oil Company catalog of RAYO lamps & Lanterns, circa 1912, possibly from Scovills, although we know Bradley & Hubbard made the RAYO lamps.

D = Design Patent, RE = Reissue of an earlier Patent