Lamps from ancient Greece of the 5th and 4th centuries BC tend to be quite simple, wheel-made and usually circular with a nozzle and the sides partially turned in to conserve fuel and as a safety precaution. These lamps are usually black-glazed and sometimes also have a rear handle. The glazing helped to make the pottery less porous so the oil did not ooze and be wasted.

This is one awesome blog article.Much thanks again. Keep writing.

Roman bronze lamps are usually very well made because they lend themselves to better modelling. Often they are in the shape of animals such as dolphins, or human heads, or objects such as a gladiators helmet. Because of their material, they are obviously much more expensive than the ordinary pottery lamps. Many of the Late Roman/Byzantine bronze lamps have Christian motifs such as the Chi-Rho monogram, a dove, Latin Cross, etc.

A variety of ancient oil lamps are always available on theArtemissionsite in the Ancient Oil Lamps category.

Collecting Roman lamps especially can be quite rewarding because of the great variety there is of decoration on them. It is possible to concentrate on just one aspect, such as animals, ships, etc, as well as studying the makers marks to make them more personal.

This is very interesting, You are a very skilled blogger. I have joined your feed and look forward to seeking more of your fantastic post. Also, I have shared your web site in my social networks!

The red-fired pottery lamps of Christian Roman North Africa are interesting. Obviously, they often have Christian scenes on them such as the Sacrifice of Isaac, the Children in the Fiery Furnace or even, very rare, Christ surrounded by the heads of the Twelve Disciples. Christian symbols include the Chi-Rho monogram (the first two letters of Christs name in Greek), a Christogram cross, fish, or a chalice with doves.

The Achaemenid Empire was the largest that the ancient world had seen, extending from Anatolia and E[…] 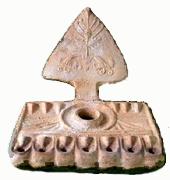 Roman lamps, mainly wheel-made but also larger hand-moulded examples, are amongst the commonest available and the most collectable. Again, they can range enormously in size, but the majority are about 10-12cms in length. Those of the 1st and 2nd centuries AD generally have a scene or decoration moulded on thediscus(the top) where the oil filler hole is located. Also, many carry a makers mark impressed into the base, a number of whom can be identified back to their factories. The pottery fabric varies with lamps made in different localities, and this is often a means of identification of origin.

First of saucer-shape, they then had the sides pinched up to make a nozzle to support a linen wick many have several spouts and are often referred to as cocked hat lamps. They are quite common and come in small and large sizes. They are often difficult to date because they are so simple in form, most of them are around the middle years and later of the first millennium, BC.

There is a tendency with these lamps to have single subject motifs and some very unusual and rare examples carry the Jewish menorah seven-branched candlestick. Many 1st century AD lamps made in Italy have been found in North Africa, where they were imported before the local pottery industry got going. The Christian lamp factories operated mainly between AD 350 and 425, when the invasion of the Vandals destroyed many of them.

The earliest oil lamps appear to be simple scooped out dishes of stone which held oil or animal fat and a floating wick. They were used by the artists who decorated the painted caves of Europe during the Magdalenian Period some 12,000 years ago. With the invention of pottery very simple lamps appeared in the Near East.