Im going to acquire a few more from the maker and see if we can work out some clear distinguishing features.

Lets take a closer look at these two:

These lamps seem to be imitating something in between:

In which case, apart from anything else,the fabricand slip arestill wrong.

The slightly largerlamp is the more obviously fake – the slip looks more like applied colouring than a true slip -but thesmaller lamp is reallyquite good seen alone. 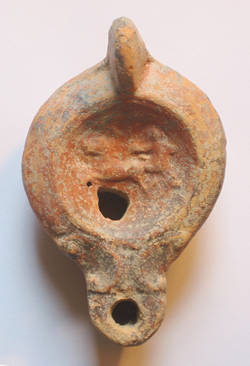 One might be surprised that any such as theese actually sell, but they do, every day, on eBay and a few independent websites.

But can you tell whichare fakes here??

1. They are slightly heavier than one would expect.

Fakes and forgeries in Classical pottery

In fact these are all from the same hand. Sold on eBay but clearly as reproductions not genuine antiquities.

I get the feeling that the fakers arent quite sure what they are copying.

Are these discus designs simplymade upor are they copied?

2. They are not properly slipped but are painted.

I have shown some pretty dreadful fake lamps here on these pages and I hope this has helped some new collectors.

Here is the midlde fake again withanotherusing the same mould for the discus though the lamp in its entirety is slightly larger.

The Fakebusters and other websites about fakery

Roman volute lamps: The conversion of real scenes into fake ones

And a provincial copy (probably Balkans): on the right above.

It helps tremendously to see two examples side-by-side and these are very good evidence of what to look for.

The classic Italian lamp: on the left below

One wonders if the re-sellers are so honest!

In which case they fall a long way short in every respect.

In fact the same master craftsman made both the middle one and the one on the left.