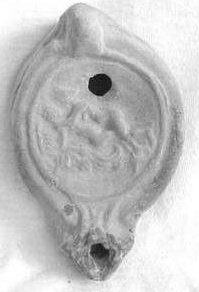 The use of oil lamps also had a revival around the mid 18th century, exclusively in Italy, when them began to be made of silver and used a reservoir attached to a long rod supported by a large base.

while bronze lamps had decoration on the burners, sides or handles. Preferred themes were mytology,nature or human life (fightings, games and even sex). After the introduction of Christianity, iconographies with religious motifs became popular.

Oil lamps may be set on any flat surface or hung by a chain. The most frequently used materials were clay and bronze, and more rarely gold, silver, glass or stone. Vegetable oils were usually employed as fuel, but in some countries, such as Sicily and Babylon, mineral oils were used. Plants or animals fibers were used as wicks.

Thelucernais an oil lamp widely used since ancient times. Lamps were made with an oil container and one or more wick spouts. The use of oil lamps is mentioned in Homers Odyssey (XIX, 34) and their use is also confirmed in Crete at the age of Mycenaean civilization (remnants were found in ancient palaces of Cnosso and Haghia Triada in Crete). Later, oil lamps were used by Phoenicians and Greeks who handed down their use to the Romans around the 4th century b.C.The more ancient did not have covers , and had a small flat case and a wick spout on the rim.

In the Middle Ages, the use of oil lamps declined owing to the adverse effects of the smoke they produced. They became popular again after improvements were made in the mid 16th century by Gerolamo Cardano, who invented a special reservoir to regulate the oil flow to the wick. A. Argaud further improved them around 1780 by providing a burner with two empy cylinders which reduced the smoke and made them burn more brightly.

The largest production of these lamps was in Rome and Papal Territories, while limited quantities were produced in Naples, Milan, Genoa, Venice and Florence. At the beginning of 19th century, the neo-classical taste was satisfied by the production of figural oil lamps, usually with their reservoir supported by human figures in Egyptians clothing, Greek or Roman Divinities and, rarely, animals.

Mercury was a favourite support for oil reservoir

A SMALL COLLECTION OF ANTIQUE SILVER AND OBJECTS OF VERTU

At first oil lamps had a circular or flattened form. Later, forms grew in lenght, inclinig towards oval.

These lamps were provided with a shade and were richly equiped with snuffers, tweezers and estinguishers hanging from chains that were applied to the rod. Production of oil lamps declined in late 19th century when more efficient sources of illumination became available. However, limited production survived into the 20th century when they were made exclusively for decorative purposes.

Later, this shape was replaced by more practical ones with covers, the form of a flat box , and with a spout on the rim. These covers protected oil from contamination. Afterwards, handles were added, as well as one or more protruding spouts and holes for ventilation.