The House in Which Five Wicks or the Panchamkukha Deepam-Similarly the number of cotton wicks used also signifies various theories like that a single wick is used to pray for normal welfare and this kind of deepam is known as Eka Mukha Deepam. Dwimukha deepam or the lamps with double wicks are said to bring about consonance and peace among friends and family. One is blessed with progeny when three wicks or the Trimukha Deepam is used. The Chathurmukha deepam with four wicks is said to bring all-round prosperity and good food. The house in which five wicks or the Panchamkukha deepam is used is showered with akhanda aishwaryam and wealth. The five faces of the lamps are said to indicate the five notable qualities that a woman of the house is supposed to have namely affection, intelligence, resoluteness, patience and caution.The place where the oil is poured denotes the mind of the women of the house, thus when the lamp is lighted all the five adorable qualities of the woman becomes distinct. The Shanmukha deepam with six wicks blesses with Knowledge and renunciation. 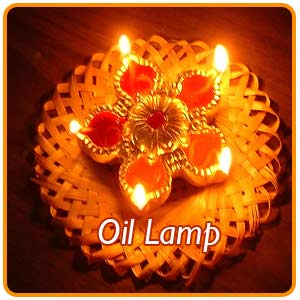 -This prayer says that we prostrate in front of the almighty and light not only the lamp but also the light of knowledge which is nothing but the supreme power, helping to vanish the ignorance which is the darkness so that we can reach very high in life. Jyothi is the other common word used for light in most of the Indian languages. People believe that when we offer prayers to God by lighting of lamp, God is pleased with us and he is sure to reward us with tremendous prosperity and health. Usually women take the lead, both married women or girls of marriageable age who light lamps and pray for the welfare of their family members and for motherhoods and for marriage to the right man. There are also beliefs which say that Goddess Rajarajeshwari who is a combined form of Goddess Durga, Lakshmi and Saraswathi is said to reside in the lamp. Thus one can win the favor of Goddess Deepalakshmi or Rajarajeswari by doing poojas with vermillion and flowers on all days and especially on Fridays is quite promising with lot of benefits.

There are group of people who argue by comparing the tube light or bulb in comparison to that of the diyas or the lamp, for they fail to understand that the oil lamp lighted using wicks have much more further spiritual significance like our vaasanas or negative tendencies and the wick, the ego. Just like the flame of the lamp one should develop knowledge which helps us in removing our lofty ideas and incomprehension. Lighting of lamp has other significances like it is a part of Bhutaaradhana or element worship.

-In most of the Hindu homes we can witness a lit lamp in front of the Lord. While in some houses the lamps are lit in the morning, dawn and in some house at dusk or in the evening. There are also houses in which the lamp is lit twice a day. Whereas there are also people who continuously keep the lamp lighted and this is called as the Akhanda Deepa.No auspicious occasions are said to begin without the lighting of lamp. But however with the latest trend since women also get to work and of the nuclear family system there are hardly people left at home to light lamps.

-According to Hinduism light signifies purity, goodness, good luck and power. The existence of light means the non- existence of darkness and evil forces. Diwali is known as the festival of lights for each house on this particular day is lit up with oil lamps or candles or colorful electric lights. But however mostly people follow the traditional practice of lighting earthen lamps with cotton wicks. There are legends which states that in Northern India lamps are lit during diwali to signify the return of Lord Rama along with his wife Sita and brother Lakshman after 14 years of exile in the forest. So the people in order to welcome and celebrate this occasion lighted lamps. Soon this became quite prevalent on the day of Diwali to light lamps. Whereas in South India lamps are lit to celebrate the victory of Goddess Durga over the notorious demon king, Narakasura which indicates the triumph of good over evil and thus light over darkness. Lighting lamps during Diwali is both spiritually and socially significant.

Darkness to Light passes on the Message of Peace 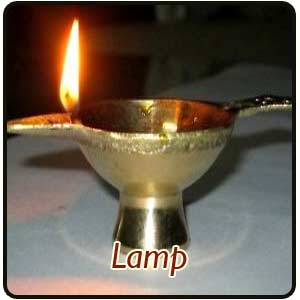 Legens about Tulasi which comes across during the Churning of the milky ocean-Usually Diwali is celebrated on the new moon day when there is total darkness everywhere. Evil spirits are generally said to be active during darkness. So, lamps are lit in every corner of the house to weaken these evil forces. The lights of Deepavali outside every door signify that the inner spiritual light of an individual must reflect outside too. With one lamp lighted hundreds of other lamps can also be lighted without affecting its own light which is signifying the fact of unity among each other.Lighting of lamps facing different directions has various significances – when a lamp is lighted facing the North, it means we wish for success in all that we do and also this is the most preferred direction to light a lamp. Lamps facing the eastern direction indicate good health and peace of mind. If we wish freedom from loans and success over enemies then the suitable direction to light the lamp is facing east. A lamp is never lit facing the south direction for it is considered to be inauspicious. 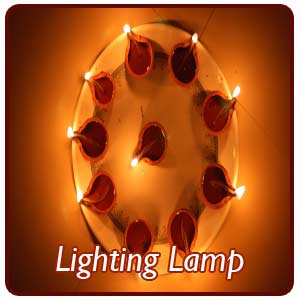 -Lamp is thus said to lead us from darkness to light and passes on the message of peace and light to the man proving it extraordinary and great. The common prayer or mantra which is recited at the time of lighting a lamp is

It is a Traditional Practice in India to Light a Lamp-When we light a lamp we simultaneously get to pay regards to other Gods like as we light a lamp for Agni, place water for Jala, we place incense stick smoke for vayu, sandal paste, Bhasma, vermilion for Prithvi and deep meditative prayer for Akasha.It is a traditional practice in India to light a lamp before starting any propitious ceremony or rituals. When we light a lamp the divine good will of the almighty is spread throughout the house thereby taking away the darkness, grief, sorrow and unhappiness. Gods first and foremost appearance is in the form of Light which we call as Divya Jyotir or Divine Light. By lighting the lamp we are said to kill the enemies of our intellect namely Kama, krodha, lobha, moha, mada and matsarya.Off late we can even witness men lighting lamps especially in temples and doing various other associated activities like donating oil to the temple or donating a lamp to the temple. Lighting lamps in the temples illuminates our life. When lamps are lighted in our homes every evening and we pray by reciting a few slokas, it will make our lives sparkle like the lamp.

Light and darkness the contrasting features symbolize two different factors namely the former indicates knowledge and the latter denotes ignorance. Light is always compared to Lord for he is the source of knowledge and also known as Knowledge Principle, or Chaitanya, who restores life or vigor and the spiritual illuminator of our knowledge. When light is brought into darkness it has the power of removing the darkness completely. Light symbolizes knowledge and Isana is the origin of knowledge.-Just like light removing away darkness, knowledge is said to remove the ignorance in a person. Also knowledge is considered to everlasting wealth of a person which will help the individual to accomplish all his or her wishes and achievement. Thus light is lit through a lamp in regard to knowledge as the greatest of all forms of wealth. An oil lamp is lit to bow down to knowledge as the greatest of all forms. To light a lamp we mainly require oil or ghee and cotton wicks where the oil added to the lamp signifies our vices and the cotton wick denotes the ego of an individual. Thus with this comparison when the lamp is lit by spiritual knowledge the vices are said to be drained out and once it is exhausted automatically the ego of a person finds its way out. The flame of a lamp never burns downwards and it only burns in upward direction indicating that one should acquire knowledge in such a way that it takes us only towards better perfection. The lamp which symbolizes Tej, the Absolute fire principle has its own special status in Sanatan Vaidik Hindu Dharma.