Egypt is traversed by the Nile, the longest river in the world. Indirectly, the Nile contributed to the making of the without precedent architectural masterpieces. No other history don` t fascinate more than the one of the ancient Egyptians.

Although there were changes in the country` s life, these were so slow, that the antique people viewed Egypt as a mysterious society, without age. The first written origins of the Egypt` s history date from the year 3000 BC, from the time when Menes or Narmer, the king of the Upper Egypt, through the conquer of the Lower Egypt he united the two states.This union, with the exception of a short period of time, remained almost intact for many millenniums, when 33 dynasties succeeded. The founder of the first dynasty was Menes, and the queen of the last dynasty was Cleopatra, who killed herself about 30 BC, letting herself bitten by a poisoning snake.

The Egypt geographic location is the North Africa, between the Mediterranean Sea in North, the Red Sea and Israel in East, Sudan in South and Libya in West.

Egypt was very little influenced by the neighbor countries and until the final epoch it influenced too little the world outside the borders.

The ancient Egyptians recognized 3 seasons, determined by the manifestations of the Nile, each season lasting 4 months.

The more you try to elucidate it, the more it gets deeper in mystery.

The valley and the Nile delta helped the development of the Egyptian civilization, that` s why Herodot called Egypt a gift of the Nile.

When the attested history of Egypt starts to unreel, the system of the year of 360 days was still functioning, but it was preparing for an important reform. It was observed that this organization of the time was leading to an advance of 5 days and a quarter of the astronomic year, and the official seasons don` t concurred with the ones of the nature. Then, 5 days were added to the date of 30 of the last month, days called epagomene. But the 365 days year doesn` t exactly concurred with the astronomic one.

Although Mesopotamia was open to the new people and new ideas, Egypt was characterized by some kind of isolation. Guarded by the desert, Egypt was at a sufficient distance from the disturbances of the Close Orient.

In Egypt was born the second greatest culture from history, appearing only with few centuries after it was built the Sumerian civilization in Mesopotamia, this having a great influence upon the development of the Egyptian civilization at its beginnings.

After its making, the Egyptian civilization proved to be pretty stabile, conservative and with longevity.

The beginning of the floods marked the New Year, moment that concurred with the appearance on the arch, in the same point with the Sun at sunrise, of the star Sirius, called by them Soth. The year was divided, initially, in 12 months and these had each 3 decades of days. 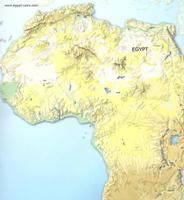