Magnificent examples of megalithic construction and pyramids in Egypt.

Couple with this, the known fact that many of these megalithic building cultures lived at opposite ends of the world, or during different periods in history. This concept places our ancestors more likely to have been isolated from each other than to have interacted and shared their cultural beliefs. Few ancient trade routes have been discovered and some of the furthest known distances materials were transported range from 1,500 to 2,000 miles. Were talking over 9,000 miles if a plane flew relatively straight point A to B, from Egypt to visit Palenque. Yet evidence such as herbs only found in South America have been found buried with some Pharaohs, indicating these two cultures may have interacted directly enough. Multiple cultures around the world were able to build with such precision, on such an enormous scale, with so many strikingly similar features that it gives the distinct impression they must have interacted in some way.

Sanliurfa ruins in Turkey believed to be the oldest known construction.

Its understood the importance of the Gods and the honor in pleasing them. Common sense leads one to believe that our ancestors wouldve built in the manner if it were easy for them to do. New-age theorists and alien astronaut proponents propose ideas pushing boundaries beyond brute-force manpower by the numbers to simple yet effective techniques, possibly learned from the Gods themselves. Scientists have established theories for several mysterious locations based on archaeological findings and historical records indicating potential methods our ancestors might have used. The problem with most sites is a strange lacking of tools believed to be used for moving rocks weighing upward of 400-500 tons. Elaborate winch and pulley mechanisms could be suspect for some cases, as some evidence in the Great Pyramid of Giza alludes to, but not one piece found so far can explain some of the sites modern eyes pry upon.

A mysterious hole and hydraulic system could be protecting massive treasure.

Millions of tons of sandstone quarried to create a replica home of gods.

Massively impressive megaliths, monoliths, as well as other stone structures seeming to defy modern logic can be found all around the world. Countless theories have been created to try explaining how they were built and for what purpose. These gigantic ancient creations have reshaped the way we think of our ancestors and their past capabilities. Other theories suggest it is not believed, rather assumed, that many of the cultures used primitive tools to shape and move giant blocks. The question we must ask is not why our ancestors constructed these mysterious ancient monuments, as proposed by ancient alien theorists, but why would they build on an enormous unprecedented scale, perhaps along the lines of Egyptian pyramids?

Mysterious cosmic city in the clouds built on the top of a mountain.

Modern megalith site may have been influenced by Egyptian construction techniques.

Megalithc construction of twin temples believed to have been built in one day.

Ancient city of Tiahuanaco with interstellar gateways and doors to the heavens.

Lost ruins suggest only 5% of Mayan civilization has been uncovered. 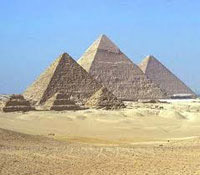 Huge megalithic construction in the Visoko Valley with a pyramid of the sun.

Enormous geoglyphs etched into the plains of Nazca are visible from above.

Megalithic stone ruins in Cambay thought to be Khambhat and Dwarka.

The journey to uncover the legendary lost city of Atlantis.